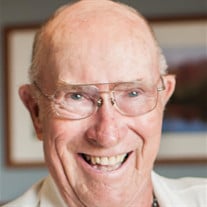 Erwin P. Johnson, Jr., 85, passed away on Wednesday, June 5, 2019, at Sanford Hospital Fargo, surrounded by his family. He was born October 25, 1933, in Fergus Falls. He was the 3rd of 6 children born to Erwin Sr. and Florence (Nelson) Johnson. He lived with his parents and siblings in Aastad Township until 1943, when his parents purchased a farm in Orwell Township. He attended school district 222 through the 8th grade and then attended high school in Fergus Falls, later receiving his GED while in the army. He enlisted in the Air Force in 1951 when he was 18. He was discharged 6 months later when his father became ill and he had to go home and farm. He was discharged from Lackland Air Force Base in San Antonio, TX in 1952 with an Honorable Hardship discharge. Erwin married Ellen Ecker on Dec. 4, 1954, at Bethlehem Lutheran Church in Fergus Falls, where he was confirmed. They made their home in Minneapolis, where Erwin began work with White Mfg, St. Paul, in 1953 as a shop foreman. Erwin Spent 2 years in the Army from 1955 to 1957, spending 13 months in Korea, and received the National Service Defense medal. After his army tour of duty, he returned to his position with White Mfg in St. Paul, MN. In 1965, he and Ellen moved to Fargo, ND to work with NaChurs Fertilizer Co. as an area manager, and then with Mobility Mfg as a shop foreman. Erwin and Ellen moved to Fergus Falls, MN in 1972, where he began work in refrigeration and major appliance service, the last 22 years as owner of his own business, A-1 Refrigeration & Appliance Service. He retired in 1996. Thirteen of his retirement years he was a volunteer driver for the DAV for western Otter Tail County, driving veterans to VA clinics in Fargo, St. Cloud and Minneapolis. He enjoyed visiting with them and listening to their stories. Erwin was a member of the American Legion, Bethlehem Lutheran Church where he was confirmed and married, and a Life-Member with the V.F.W. His many pastimes included bowling, golfing, hunting, yard work and snow-blowing. In his retirement, he enjoyed The Viking Cafe coffee table with friends and golfing at Pebble Lake with the guys. He loved his family most dearly, and enjoyed visiting with relatives, friends, and neighbors. He was preceded in death by his parents; sister and brother-in-law, Claire and Don Orpen; brother and sister-in-law, Stanley and Betty Johnson; brothers-and-sisters-in-law, Jim and Virginia Ecker, Kenny and Donna Ecker, Alice G. Ecker, Marleen and Adolph Gustafson, Dorothy Landberg, and Emery Wiese. He is survived by his wife, Ellen; sons, Scott (Mary) Johnson of Minneapolis and Derek (Shannon) Johnson of Woodbury; grandchildren, Simon, Daphne, and Felix of Woodbury; sisters, Jolaine Anderson of Fergus Falls, Shirley Johnson of Plano, TX; brother, Paul (Darlene) Johnson of Fergus Falls; brother-in-law, Phil Ecker; sister-in-law, Liz Wiese; many nephews, nieces, grand-nephews and grand-nieces. In lieu of flowers, the family would prefer donations to Bethlehem Lutheran Church or the charity of your choice. Visitation: 5:00 – 7:00 p.m., Thursday, June 13, 2019, with a public prayer service at 6:30 p.m. at Olson Funeral Home, Fergus Falls. Visitation will resume one hour prior to the service at the church Service: 1:00 p.m., Friday, June 14, 2019 at Bethlehem Lutheran Church, Fergus Falls, MN Clergy: Reverend Tom Peterson Interment: Knollwood Memorial Gardens, Fergus Falls, MN

Erwin P. Johnson, Jr., 85, passed away on Wednesday, June 5, 2019, at Sanford Hospital Fargo, surrounded by his family. He was born October 25, 1933, in Fergus Falls. He was the 3rd of 6 children born to Erwin Sr. and Florence (Nelson) Johnson.... View Obituary & Service Information

The family of Erwin Palmer Johnson created this Life Tributes page to make it easy to share your memories.