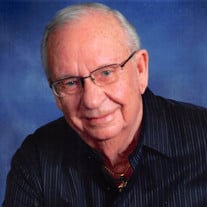 Ernest C. Sorben, 88, of Fergus Falls, died Tuesday, June 4, 2019, at Lake Region Healthcare, Fergus Falls. My life as told by Ernie I was born May 1, 1931, in Aurdal Township, rural Otter Tail County, the son of Henry and Anna (Twedt) Sorben. I attended elementary schools in Maplewood, and Pelican Rapids and graduated from Fergus Falls High School in 1949. I worked for the Great Northern Railroad for a short time in Montana. In 1951, I entered the US Army and served the majority of my tour at Fort Richardson, near Anchorage, Alaska. I was discharged in 1954. While in the service, I married Marilyn J. Thom at Fort Devens, Mass. in 1951. She accompanied me to Alaska and our first child Rebecca was born there. I attended technical school at North Dakota State School of Science, graduating in 1957, then started employment with IBM at Kingston, NY as an Electronics Engineer. While attending Tech School, our second child, Valerie was born in Fergus Falls. During my 31 years with IBM, we lived in five different states and England. My work included a lot of travel, throughout most of the lower 48 states and Japan. I retired from IBM in 1988, as an Advisory Engineer in Rochester, MN. After retirement, we moved back to Fergus Falls, where I started repairing clocks at Welander Jewelers, which started as a hobby to maintain my own clocks, but continued to repair clocks for other people for several years. I enjoyed my retirement doing the things I liked doing, hunting, fishing, woodworking, restoring old clocks for people and spending the winters in Arizona with my snowbird friends. I was a member of Zion Lutheran Church, where I served on the council as president and was a member of the call committee. I also was a member of the American Legion Post 30 in Fergus Falls. Preceding me in death were my parents; a sister, Lorraine and a grandson-in-law, Shad Forsman. Survivors include my wife, Marilyn; two daughters, Rebecca (Craig) Jorgensen of Fergus Falls and Valerie (Mark) Schoolmeesters of Champlin; grandchildren, Zachary (Jill) Fjestad, Kelsey Fjestad, Keisha Forsman, and Cayla (Geoffrey) Jones; and step grandchildren, Jeremy (Darcy) and Ryan (Katie) Jorgensen and Jessica (Darin) Kaehler; six great-grandchildren; 10 step great-grandchildren and one step great-great-grandchild. Memorials preferred to Zion Lutheran Church or the Salvation Army. Visitation: one hour prior to the service at the church Service: 2:00 p.m., Friday, June 14, 2019, at Zion Lutheran Church, Fergus Falls Clergy: Reverend Chris Eldredge Interment: Oak Grove Cemetery, Fergus Falls Arrangements provided by Olson Funeral Home, Fergus Falls online condolences may be sent to www.olsonfunealhome.com

The family of Ernest C Sorben created this Life Tributes page to make it easy to share your memories.