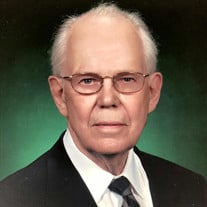 Embert L.C. “Bud” Larson, 93, of Fergus Falls and recently of Eden Prairie, passed away on September 25th at home, surrounded by family. Embert was born March 2, 1925 in Fergus Falls to Embert and Othelie “Tillie” (Toftely) Larson. After graduating from Fergus Falls High School, he enlisted in the US Navy and served during World War II, specializing in radar technology. He graduated from the University of Minnesota in 1948 with a degree in Electrical Engineering, and received his Masters degree from Northwestern University in 1950. He worked for Ottertail Power Company for 40 years and retired in 1988 as Director of Electrical Engineering and Operations. In 1948 he and Helen (Thunselle) were married at Fergus Falls and after living briefly in Detroit and Chicago, made their home in Fergus Falls. They enjoyed summers at their cabin on Ottertail Lake and their travels after retirement. He was preceded in death by his parents and a brother, Roger. He is survived by his wife of 70 years, Helen; daughter Linnea (Andrew) Turner of Excelsior, MN; grandsons Harrison, Robert and Samuel Pajor; step-grandsons William and Benjamin Turner; a brother Wayne (Marian) of St. Paul, nieces and nephews. He was loved and will be greatly missed by his family and by many who would call him a friend. The family would like to extend heartfelt thanks to the Colony of Eden Prairie and Fairview Hospice. In lieu of flowers, memorials may be directed to JDRF (Juvenile Diabetes Research Fund), Bethlehem Lutheran Church or donor’s choice. Visitation: 1:00 - 3:00 p.m. on Sunday, September 30, 2018, at Olson Funeral Home Service: 11:00 a.m. on Monday, October 1, 2018, at Bethlehem Lutheran Church, Fergus Falls, MN Clergy: Rev. Jake Anderson Olson Funeral Home, Fergus Falls is in charge of arrangements. Online condolences may be sent to www.olsonfuneralhome.com

The family of Embert Larson created this Life Tributes page to make it easy to share your memories.