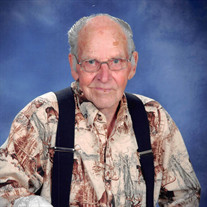 Elwyn Lyle Friedrich, 85, a resident of Fergus Falls, died Wednesday, September 12, 2018 at Little Falls Care Center in Little Falls, MN. Elwyn was born on September 2, 1933 at the home farm west of Fergus Falls, the son of Arnold and Hilda (Schmidt) Friedrich. He helped on the farm full time until the age of 17, at which time he went to work at City Service in Fergus Falls as a mechanic and next at City Service in Pelican Rapids. On October 9, 1954, he married Bette Lou Olson. Following the birth of their first son, they moved to California and lived there for a year and a half. They returned to Fergus Falls and he went back to work for City Service. He later drove a gravel truck for Johnson and Olson out of Fergus Falls. He started to farm and also work for International Harvestor in Fergus Falls as an assembly and delivery person for 10 years. In 1969, he began to drive truck for Milkways and then for MidAmerica. He married Carolyn Ott (Vandermeer) on January 21, 1978. Around 1986, he started with Friedrich Harvesting custom combining and driving over the road, and later went to work for Buy-mor in Fergus Falls, where he retired. Carolyn passed away on January 9, 2009. He was a member of Augusta Lutheran Church in Elizabeth. Elwyn enjoyed deer hunting, reading, western novels, tinkering on stuff in his shop, and hanging out at Buy-mor with the boys. Preceding him in death were his wife, Carolyn; his parents; brother, DuWayne, brother and sister-in-law, Arlo (Elenore) Friedrich, brother-in-law, Warren Umlauf, stepson, Jerry Ott, brother-in-law, Dick Jochim and brother-in-law, Gilbert Gunderson. Survivors include his children, Jeff (Linda) Friedrich, Bruce (Jane) Friedrich, Greg (Colleen) Friedrich, Glenn (Kim) Friedrich, Becky Friedrich, Jolene (Kevin) Lubitz, Jim (Kari) Ott and Jason (Mindy) Ott; several grand and great-grandchildren; sister, Ellen Gunderson and sisters-in-law, Donna Umlauf, Delores Friedrich and Sandy Jochim. Visitation: One hour prior to the service at the church. Service: 10 a.m. Saturday, September 15, 2018, at Augustana Lutheran Church, Elizabeth, MN Clergy: Reverend Kate Bruns Burial: Augustana Cemetery, Elizabeth, MN Arrangements are provided by the Olson Funeral Home in Fergus Falls.

The family of Elwyn L. Friedrich created this Life Tributes page to make it easy to share your memories.