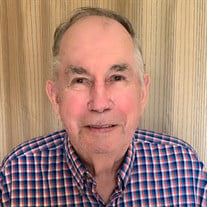 Elroy A. Anderson, age 88, of Fergus Falls, MN passed to heaven on January 16, 2021 at the MN Veterans Home Fergus Falls. Elroy was born October 29, 1932, to Arthur and Antoinette (Weiss) Anderson in Erhard, MN. He was baptized at St. John’s Lutheran Church in Elizabeth, MN, confirmed at Tonseth Church in Erhard, MN, and attended school near Erhard. On January 3, 1953, Elroy married the love of his life, Arlene Ronningen. They celebrated 65 years of marriage before Arlene’s passing in 2018. With their reunion in heaven, we are certain Elroy is holding Arlene’s hand as they experience the joy of being together again. Elroy served in the army during the Korean war from April 1953, to March 1955. It was during this time that Arlene welcomed their first daughter Elaine and four years later they welcomed Laurie. Elroy drove truck for 38 years starting with North Star Dairy then Quickie Transport and Rogness Trucking. After retiring from trucking, he enjoyed working at Service Food for a few years. He also was on the grounds crew for the Trinity-Faith Church cemetery. Elroy and Arlene both enjoyed volunteering at the Fergus Food shelf together. Elroy and Arlene spent many summer weekends camping and making great memories with family and good friends on Silver and Jewett Lake. In August 2001, Elroy and Arlene traded in their camping trailer for their retirement home on Jewett Lake. Elroy spent many hours fishing from his boat, from the dock, or in his fish house, and Arlene was always waiting to fry up the fish. They enjoyed a good life and great neighbors at the lake for 15 years before they moved to Pioneer Pointe and later to PioneerCare Heartland Cottage. In November 2018, shortly after Arlene passed to heaven, Elroy moved to the MN Veterans Home Fergus Falls where he enjoyed having other Veterans to visit with as well as great staff, volunteers, and the spouses of vets who always included him. He was treated like family. Elroy and Arlene met so many “Angels” on their journey and we are so thankful for the care and love they were given at each place they lived. Waiting for him in Heaven were his wife, Arlene, his parents, Art and Neta, his sisters, Leone Backstrom, Verna Mae Duenow, Betty Kohlhase, his brother, Laurel Anderson, and special in-laws. Elroy is survived by daughters, Elaine (Charlie) Blixt of Erhard, MN, and Laurie (Rick) Steen of Fargo, ND; grandchildren, Jake (Jessi) Blixt of Menahga, MN, Jamee (Dustin) Blixt Suggs of Eden Prairie, MN, Nick (Sasha) Blixt of Minneapolis, MN, Jenna (Tyler Nissen) Steen of Fargo ND, and Alex (Miranda) Steen of Fargo ND; great-grandchildren, Casey, Bella, Emma, and Charlie Blixt, Freya and Duncan Suggs, and Makenna Steen; and sisters, JoAnne Haiby and Dorene Nelson; brother, Ken Anderson, and numerous special cousins, nieces, nephews, and in-laws. In lieu of flowers, memorials are preferred to MN Veterans Home Fergus Falls or Trinity Lutheran Church, Fergus Falls. Walk-Through Visitation: 11:00-1:00 p.m. Saturday, January 23, 2021 at the Olson Funeral Home, Fergus Falls Service: A private family service will be held with a Celebration of Life at a later date. Please refer to Elroy’s tribute wall for a recording of the service. Clergy: Reverend John Christensen Interment: Trinity-Faith Cemetery, Fergus Falls, MN Arrangements are provided by the Olson Funeral Home in Fergus Falls. Online condolences may be sent to www.OlsonFuneralHome.com

The family of Elroy A. Anderson created this Life Tributes page to make it easy to share your memories.