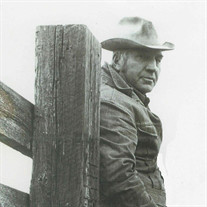 Elof Norgren Jr., 88, of Fergus Falls, died Friday, June 18, 2021, at his residence. Elof Martin Norgren Jr. known as Sonny, was born on July 7, 1932 to Elof and Anna Norgren. He attended School District #37 receiving a diploma June 22, 1945 and then helped out on the family farm until he enlisted in the Army in 1956. He served active duty in Germany from 1956 to 1958 and then in the Army Reserves until 1962. He enjoyed his time in the service. After returning from Germany, he took over the family farm with his brother Kermit, raising Herefords and when Kermit could no longer farm with him, he continued on his own producing some of the best hay in the area. Sonny was a steward of the earth loving everything about Mother Nature. He loved farming, gardening, hunting, fishing, trapping, bird watching, and in his later years he really enjoyed seeing the deer and turkeys that passed through his place and visiting with whomever stopped in to chat. Sonny passed away on the farm he spent his entire life on. He is survived by his sister, Janice (Charles) Vansgness; sister-in-law, Diana Norgren, and numerous nieces and nephews. He was preceded in death by his parents; his longtime friend, Bonitta Anderson; siblings, Eleanora (Eugene) Holt, Ruth (Herbert) Thom, Mae (Harold) Haugen, Joyce (Robert) Thom, Fern (Carlton) Stras, LaVerne (Garnet) Johnson, and Kermit Norgren. Blessed be the memory of Sonny Norgren. In lieu of flowers memorials preferred to St. John Cemetery. Visitation: Half an hour prior to the service at the cemetery. Graveside Service: 1:00 p.m., Thursday, June 24, 2021, at St. John Cemetery in Elizabeth, MN Clergy: Reverend Craig Palach Arrangements are provided by the Olson Funeral Home in Fergus Falls. Online condolences may be sent to www.olsonfuneralhome.com

The family of Elof "Sonny" Norgren Jr. created this Life Tributes page to make it easy to share your memories.