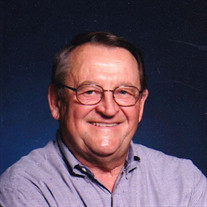 Elmer “Al” Dahms, 77, of Fergus Falls, died June 6th, 2020 peacefully at home with his family, under the care of Hospice. Al was born on February 28th, 1943 to Elmer and Emma (Tonak) Dahms in Clements, MN. He graduated from Redwood Falls High School in 1961 and went on to the University of Minnesota where he met and married his wife, Barb Wasson, in 1964. After his graduation in 1965, he served as an officer in the U.S. Army Quartermaster Corps, including serving in Vietnam. Al and Barb lived many places during Al’s long career at Josten’s Inc., including Minnesota, Massachusetts, Texas, Illinois (twice) and Tennessee, with much of his career spent in Princeton, Illinois. He was proud to be the plant manager at the Josten's Princeton plant when the plant produced the medals for the 1984 Los Angeles Summer Olympics. During his time in Princeton, Al received his MBA from Bradley University. He retired from Josten’s in 2000, after which he and Barb built a house outside of Redwood Falls. Retirement life was too slow for Al, however, so in 2003 he went into regional sales for MTM Recognition as a sales representative. Al retired for good in 2017, shortly after he and Barb moved to Fergus Falls to be closer to their grandkids. Family was always important to Al, and he particularly cherished his role as grandfather to his three grandsons. He was very close to each of them and made a point of being involved in their lives, even taking the three of them on several trips in order to spend time with them and make lasting memories. He also loved to help them with projects and was always a good source of advice. He said many times that he wanted to spend as much time with his grandsons as he could while he was able, and that is just what he did. Preceding him in death were his parents Elmer and Emma, younger brother Kevin, and infant brother and sister Dennis and Virginia. Al is survived by his wife of 56 years, Barb; his children, Jeffrey Dahms of Chicago, IL, and Tanya (Mark) Sundberg of Erhard, MN; his grandchildren, Jorge Dahms, Ben Sundberg, and Sam Sundberg; brothers Gene (Judi) Dahms and Gary (Barb) Dahms; sister LuAnn (Brad) Schloesser; brothers-in-law Rud (Timmy) Wasson, Bob (Karen) Wasson, and Bill (Diane) Wasson, as well as many nieces and nephews. A private family funeral service will be held at Olson Funeral Home in Fergus Falls, with Pastor Rud Wasson, Jr. officiating. A private Interment service will be held at New Avon Church Cemetery in Redwood County, Minnesota. Online condolences may be sent to www.olsonfuneralhome.com.

The family of Elmer "Al" Dahms created this Life Tributes page to make it easy to share your memories.