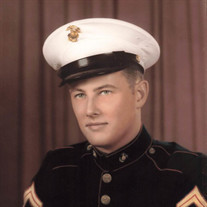 Gracious, Thoughtful, Loving, and Kind On June 18, 2021, at the age of 90, two days before his 62nd wedding anniversary, Eldon Emil Kratzke’s physical body passed away solid in his Christian faith and secure in the knowledge that he was well-loved by his family and friends. Eldon was born April 6, 1931, to Emil and Irene (Davis) in Lida Township, Otter Tail County, Minnesota. He attended Otter Tail County School District 138 and won many District and County spelling contests. Eldon graduated as a salutatorian from Pelican Rapids High School in 1948. He was a graduate of Dakota Business College, Fargo, ND, and graduated Magna Cum Laude from Concordia College, Moorhead in 1957 with a degree in Business Administration and Psychology. He then studied for a year in the graduate program at the University of Minnesota. During the Korean War, Eldon served two years in the United States Marine Corps until the end of his tour of duty in 1954. In 1953 Eldon received a Commendation for Outstanding Performance of Duty from his Commanding Officer at Marine Corps Air Station, El Toro, Santa Ana, CA. June 20, 1959, Eldon married his college sweetheart, Margaret Rysstad of East Grand Forks, MN. Margaret was later a business instructor at the Fergus Falls Community College. They were often seen cruising the area in their honeymoon car, a 1959 Edsel. Eldon was employed by Otter Tail Power Company for 35 years at the company general offices in Fergus Falls, retiring in 1993. In 1989 he was awarded the Presidential Otter Tail Award of Excellence. Prior to his military service, Eldon’s first away-from-home employment was at the Ford-Lincoln-Mercury Dealership in Lewiston, MT. Eldon and Margaret traveled to all 50 states, Scandinavia, Western and Eastern Europe. They enjoyed tour-group travel and their favorite road trips were to Duluth, Itasca State Park, Branson, MO, Medora, ND, and Yellowstone National Park. Eldon’s 90th birthday this April was so enjoyable for him, and he wished he could personally thank everyone for the wonderful birthday cards and over 100 well wishes. He read them all twice and planned to read them all again. He was preceded in death by his parents and many good friends. Eldon is survived by his wife, Margaret; son, Mark (Carol) of Hawley; two grandchildren, Marshal Owen and Dawson Ray of Hawley; brother, Kenneth (Margaret) of Pelican Rapids, MN; nieces and nephews, Debbie (Chuck) Evenson of Pelican Rapids, MN, Kurt (Susan) of Dent, MN, and Kathy Lehn of Fergus Falls; and, six grand nieces and nephews. Margaret’s nieces and nephews were also very special to Eldon, Orville (Karen) Anderson of Sugar Land, TX, Julie Moe of Spokane, WA, Peggy Harstad of Mankato, MN, Carol (Joel) Petersen of St. Peter, MN, Julie (Dan) Faugstad of Redwood Falls, MN, Paul Sorenson of Fisher, MN and Jodi (Dan) Schmidt of Grand Forks, ND. Eldon and Margaret have been active members of First Lutheran Church their entire married life. Visitation: 12:00 p.m. to 2:00 p.m., Monday, June 28, 2021 at First Lutheran Church, Fergus Falls. Celebration Of Life Service: 2:00 p.m., Monday, June 28, 2021 at First Lutheran Church. (Elevator available and air conditioned). Clergy: Reverend Gretchen Enoch In lieu of flowers, do a kind deed for a neighbor. Consider a donation to the Lake Region Healthcare Cancer Care and Research Center or the donor’s choice. A family graveside service will be at a later date at the First Lutheran North Cemetery. Blessed be the memory of Eldon Kratzke. Arrangements provided by the Olson Funeral Home in Fergus Falls. Online condolences may be sent to www.olsonfuneralhome.com

Gracious, Thoughtful, Loving, and Kind On June 18, 2021, at the age of 90, two days before his 62nd wedding anniversary, Eldon Emil Kratzke&#8217;s physical body passed away solid in his Christian faith and secure in the knowledge that he was... View Obituary & Service Information

The family of Eldon Kratzke created this Life Tributes page to make it easy to share your memories.