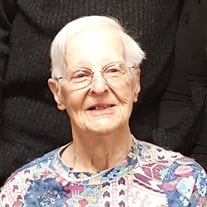 Elda Julia Pfeffer, 93, a resident of Perham (formerly of Dent), passed away Sunday, May 6, 2018 at Perham Health Living in Perham, MN. She was born on October 1, 1924, in rural Dent, MN, to Oscar and Nelda (Seger) Kuhn. Elda attended country school and graduated from Pelican Rapids High School in 1942. She worked at the First National Bank in Fergus Falls. On April 12, 1953, Elda was united in marriage to Norbert Pfeffer. He passed away on December 23, 1968. Elda raised her family on the farm in Star Lake and at age 60 she started working at the Broen Home in Fergus Falls until her retirement. In 2008, she moved to Perham and since 2016, had resided at Perham Health Living. Elda loved to travel, and she enjoyed going to her family’s school activities. She was also an avid Minnesota Twins and Timberwolves fan. Her passion for knitting created many beautiful keepsakes, including 134 Christmas stockings for family and friends. She was a lifetime member of the Maine Presbyterian Church, where she taught Sunday School, was in the choir and served as President and Vice President of the Maine Presbyterian Women. Preceding her in death were her parents, Oscar and Nelda Kuhn; husband Norbert; brother, Elton (Margaret) Kuhn; sisters, Noreen Kuhn, Doris (Walter) Haukebo, and Verla (Bob) Johnson. Survivors include her children, Paul (Mary) Pfeffer of Dent, Dale (Pam) Pfeffer of Inver Grove Heights, Nelda (Mark) Ruther of Perham, and Norma (Lonnie) Fynboh of Two Harbors; 13 grandchildren; 21 great-grandchildren; brother-in-law, David Pfeffer of Maple Grove; sister-in-law, Lorretta Pfeffer of Breckenridge; as well as many nieces and nephews. Elda will be sadly missed by her family and friends. We wish to thank the staff at Perham Health Living for the wonderful care that Elda received while there. Visitation: One hour prior to the service at the church Service: 11 a.m. Saturday, May 12, 2018, at Maine Presbyterian Church, Maine, MN Clergy: Reverend Ed Morgan Interment: Silent Vale Cemetery, Maine, MN Arrangements are provided by the Olson Funeral Home in Fergus Falls Online condolences may be sent to www.OlsonFuneralHome.com

Elda Julia Pfeffer, 93, a resident of Perham (formerly of Dent), passed away Sunday, May 6, 2018 at Perham Health Living in Perham, MN. She was born on October 1, 1924, in rural Dent, MN, to Oscar and Nelda (Seger) Kuhn. Elda attended country... View Obituary & Service Information

The family of Elda Julia Pfeffer created this Life Tributes page to make it easy to share your memories.

Elda Julia Pfeffer, 93, a resident of Perham (formerly of Dent),...