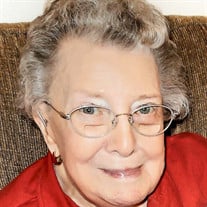 Elaine Henrietta Konold, 93, formerly of Fergus Falls, MN, passed away Friday, March 1, 2019, at the Lake City Care Center in Lake City, MN. She was a loving and devoted wife, mother and grandmother who spent her life taking care of her family and friends. Although she had out-lived many of her contemporaries, she will be greatly missed by her family and everyone who got to know her well. Elaine was born on September 10, 1925 at the Bjornstad farm on Dead Lake near Basswood, MN. She was a charter member of Basswood Baptist Church near Richville, MN and attended high school in Perham, MN graduating in 1943. She worked at the Ottertail Sanitarium in Ottertail, MN, and the Fergus Falls State Hospital. Elaine also was a Nurse’s Aide at the Pelican Valley Health Center in Pelican Rapids, MN for 30 years and then the Good Samaritan Home in Pelican Rapids for three years before retiring in 1989. On October 6, 1951, Elaine married Ervin Konold of Worthington Minnesota and they lived in Worthington for several years before moving to the Pelican Rapids area in 1959. They attended Faith Lutheran Church in Pelican for 30 years. Elaine and Ervin moved to Fergus Falls in 1995 and eventually to Lake City, MN in 2005. They had celebrated over 60 years of marriage together. She is preceded in death by her husband, Ervin Konold; parents, Henry and Gertrude (Bixby) Bjornstad; brother, Robert Bjornstad, and sister, Mildred Skugrud (Bjornstad). She is survived by daughter, Susan Thorson (Dan) of Wabasha, MN; sons, David Konold (Emily) of Brooklyn Park, MN and Thomas Konold of Dumfries, VA; grandchildren, Brenda, Michael (Tracy), Rachel, Daniel, Cheryl, and Shelby; great-grandchildren, Danielle, Nicole, Abigail, Shane, Madison, and Kelby; great-great granddaughters, Lily, and Audrey; brothers, Willard and Howard and sister, Marilyn. Visitation: One hour prior to service at the church. Service: 11 a.m. Wednesday, April 10, 2019, at the Basswood Baptist Church, rural Richville, MN Clergy: Reverend Bert Holmquist Interment: Oakwood Cemetery, Richville, MN Arrangements are with the Olson Funeral Home, Fergus Falls. Online condolences may be sent to www.OlsonFuneralHome.com

Elaine Henrietta Konold, 93, formerly of Fergus Falls, MN, passed away Friday, March 1, 2019, at the Lake City Care Center in Lake City, MN. She was a loving and devoted wife, mother and grandmother who spent her life taking care of her family... View Obituary & Service Information

The family of Elaine Henrietta Konold created this Life Tributes page to make it easy to share your memories.