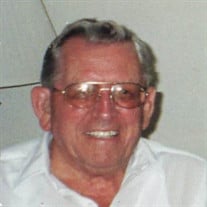 Earle Bombardier, 97, of Fergus Falls, died Sunday, April 19, 2020, at the Minnesota Veteran’s Home in Fergus Falls. Earle was born May 23, 1922, in Crookston, MN to Euclid and Bertha (Abbott) Bombardier. He graduated from Crookston High School in 1940. He joined the Army in 1942 and was sent to the 101st Airborne Division, which was being formed at the time. He took basic training in field artillery, then went to Fort Benning, Georgia for parachute training. On D-Day, June 6, 1944, his plane was shot down and on June 18 he became a P.O.W. for ten and a half months. He was repatriated in April of 1945. In 1946, he returned to Crookston and married Lola Severin. They had four children, Larry, Bonita, Gary, and Brenda. Earle drove cab and also worked for an ice and fuel company for a short time. He also was a volunteer charter member of a Crookston Police Reserve unit. He began a career with Ottertail Power Company in 1948. In 1967, he joined the Right of Way Department, then in 1969 moved with his family to Fergus Falls. He retired in 1984. In 1992, he married Phyllis Johnson. Earle enjoyed his retirement years with family and his involvement with numerous organizations. He was a 50-year member of the Masonic Lodge and all the associated York Rite bodies, Birak Shrine Club, the Disabled American Veterans, V.F.W., Purple Heart, 101st Airborne, American Legion, and Eagles. Earle was elected State Commander for the Minnesota American Ex-P.O.W. Organization in 1966. He was also a member of Hope Lutheran Church. Earle became a resident of the Veteran’s Home in 2017. Preceding him in death were his parents; in-laws, Morris and Evelyn Johnson; daughters, Bonita Benson and Brenda Eiter; step-daughter, Brenda (Fick) Campbell; brother-in-law, Vernon Johnson; sister-in-law, Joyce Barnes, and granddaughter, Lisa Eaves. Earle is survived by his wife, Phyllis; children, Larry (Marcia) of Crookston, Gary of Fergus Falls; step-children, Brian (Barbara) Fick of New Richmond, WI, Jana Fick of Backus, MN, Jonathan and Douglas Fick of Luck, WI, and David Fick of Columbia Heights, MN, and numerous grandchildren and great-grandchildren. Graveside memorial service: 2:00 p.m., Thursday, June 4, 2020, at Knollwood Memorial Gardens in Fergus Falls. Please respect social distancing during this time. The service will be held rain or shine. Please refer back to the funeral home or the Hope Lutheran Church website for a video of the graveside memorial service. Arrangements are provided by the Olson Funeral Home in Fergus Falls. Online condolences may be sent to www.olsonfuneralhome.com

The family of Earle Bombardier created this Life Tributes page to make it easy to share your memories.