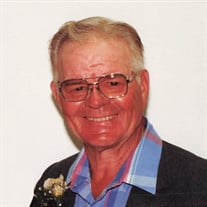 Earl D. Johnson, 91, of Pelican Rapids, died Monday, February 7, 2022, at Riverfront Manor in Pelican Rapids. Earl Dean was born February 15, 1930, to Sevander and Marian Johnson in Pelican Rapids. He was confirmed at Central Lutheran Church, rural Pelican Rapids in the 40’s. He attended country school. In 1951, Earl married Arlys Scheer. Earl was always a bit ambitious and at the young age of 15 he was trapping mink and bought a farm with the proceeds. He later purchased a milk route in Pelican Rapids hauling milk from the local farmers to the creamery. He worked road construction through the years helping to build I94 and driving truck was something he really enjoyed. Earl drove for Jennio, AMPI and Evenson's. Farming was another hobby he really enjoyed and he semi-retired with a herd of cattle to tend. He always said that when you retire, you die and he tended those cattle until he couldn't at the age of 85. Work was in his blood and he never really wanted to fully retire. Earl was a fantastic Whist player and in his early days loved to water ski claiming to have skied through the tunnel culvert between South Lida and Lida Lake. He was an avid storyteller and could tell you about everyone who lived in Maplewood Township area back in the day. Preceding him in death were his parents, Marian and Sevander; siblings, Goldie, Delores, and Donald, and daughter-in-law, Jean Johnson. Earl is survived by his wife, Arlys of New York Mills; son, Bruce (Maureen) Johnson; grandchildren, Angie (Jamie) Nelson, Anna (Mike) Nelson, and Dan (Mandie) Johnson; great-grandchildren, Kaitlin (Bob) Hegseth, Caleb Nelson, Cassandra Nelson, Alexis, Brenden, Abigail, and Ben Nolan, and Zoey, William, Wyatt, and Maisy Johnson; sister, Gloria (Gerald) Krob, and numerous nieces and nephews. Service: 11:00 a.m. Tuesday, February 15, 2022, at Central Lutheran Church, rural Pelican Rapids, with visitation one-hour prior to the service. Clergy: Reverend Phil Tobin Interment: Central Lutheran Cemetery, rural Pelican Rapids, MN Arrangements provided by the Olson Funeral Home in Fergus Falls. Online condolences may be sent to www.olsonfuneralhome.com

The family of Earl Johnson created this Life Tributes page to make it easy to share your memories.