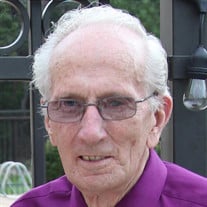 Duane Wilfred Wentzel of rural Underwood, MN left for his heavenly home on November 8th, 2020 at the age of 88. Duane was born August 14, 1932, the son of William August and Julia (Roen) Wentzel. He grew up in rural Underwood, where he attended Barnhard School through the 8th grade. In 1953 he was drafted into the US Army. He served in the Korean War until he was discharged on January 10, 1955. After he returned to the U.S., he was set up on a blind date with Anna Lien, a pretty brown-eyed brunette. They were married on April 18, 1956. In 1960 they built a home north of Underwood where they raised 5 children. He was employed at Service Food grocery store for more than 30 years. Duane had many hobbies, including woodworking and playing the accordion. Over the years he used his carpentry skills to help his children and grandchildren with home improvements. He crafted many pieces of furniture that will be treasured for years to come. Duane was a charter member of Messiah Lutheran Church in rural Underwood, where he helped in the construction of the building. Most recently he was a member of Bethel Lutheran Church - Battle Lake Campus. He was proceeded in death by his parents, Willie and Julia, sisters: Ruby Widness and Adeline Oscarson Holte, and a half-brother, Berwin Wentzel. Survivors include his wife of 64 years, Anna, his children: Deb (Mark) Watkins, of Colorado, Shirley (Jim) Wicker, Doreen (Kevin) Anderson, Mike (Mimi) Wentzel and Lisa (Carl) Kollar, 10 grandchildren: Elise (Alfredo) Carranza, Brent (Grace) Anderson, Zane (girlfriend, Samantha) Watkins, Anna (CJ) Mistich, Amy (Andrew) Maestas, Max (Emily) Kollar, Jordan (girlfriend, Kristyna) Wentzel, Olivia Kollar, Isaiah Wentzel, and Noah Wentzel, 4 great-grandchildren: Claire and Lincoln Anderson and Leia and Draven Carranza, and many beloved nieces and nephews. Walk-through Visitation: 4:00 p.m. to 6:00 p.m., Thursday, November 12, 2020, at the Olson Funeral Home in Fergus Falls. Visitation will resume one-hour prior to the service at the church on Friday. Service: 1:00 p.m., Friday, November 13, 2020, at Bethel Lutheran Church in Fergus Falls. Clergy: Reverend Kevin Foss Military participation American Legion Post 30 and VFW Post 612. Interment: Messiah Lutheran Cemetery, Underwood, MN Arrangements are provided by the Olson Funeral Home in Fergus Falls. Online condolences may be sent to www.olsonfuneralhome.com

Duane Wilfred Wentzel of rural Underwood, MN left for his heavenly home on November 8th, 2020 at the age of 88. Duane was born August 14, 1932, the son of William August and Julia (Roen) Wentzel. He grew up in rural Underwood, where he attended... View Obituary & Service Information

The family of Duane Wentzel created this Life Tributes page to make it easy to share your memories.