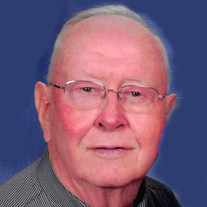 Duane Leroy Tollefson, 86, of Fergus Falls (formerly Richfield, MN), went to meet his Lord and Savior Jesus Christ on the evening of July 29, 2019 surrounded by his loving family Duane was born to Bernard and Mabel Tollefson on May 28, 1933 in Fergus Falls. He graduated from Fergus Falls High School in 1951 and attended Augsburg College in Minneapolis. He proudly served his country for two years in the United States Army. He married Carroll Langager on January 11, 1958 and together they resided in Richfield, where they raised their four children. They were married for 42 years until Carroll’s passing in 2000. He is survived by his wife, Kay, whom he married on November 14, 2002 in Williston, ND and they spent 16 memorable winters in Mesa, AZ. He leaves as his legacy his four children, Jeff (Amy) Tollefson, Colleen (Jim) Kroenke, Barb Senarath, and Tom (Sandi) Tollefson; his step children Ron Mulnix (Kathy) and Renee (Scott) Fox; along with his 12 grandchildren, Avanti, Kjirsten, Hanna, Sophie, Levi, Makayla, Aidan, Summer, Kiernan, Fiona, Dylan, and Riley; as well as his two step grandchildren, Vince and Derek Mulnix. He also leaves to cherish his memory his brother, Lyle (Diane) Tollefson and his sister, Connie (Norman) Anderson. His family remembers him fondly for his great sense of humor and his love for the Minnesota Vikings & Golden Gophers. He was preceded in death by his parents, Bernard and Mabel (Evavold) Tollefson, his brother Walter and his sister Arlene Paulson. Duane spent his career as an optician for Benson Optical in the Twin Cities. He was passionate about watching sports (especially football and softball), his Norwegian heritage, fishing, sailing, archery, bird watching, and reading books. Duane was a popular sight riding his recumbent bike around the neighborhood in Mesa. No one he interacted with remained a stranger for long. Duane spent the last few months of his life listening to gospel music on his iPad most evenings. Duane was truly one of a kind and will be greatly missed by family and friends. In lieu of flowers, memorials preferred to Bethel Lutheran Church in Fergus Falls, Minnesota. Visitation: Friday, August 2, 4pm-7pm Funeral Service: Saturday, August 3, 11:30am Both services will be held at Bethel Lutheran Church in Fergus Falls, Minnesota. Arrangements are with the Olson Funeral Home in Fergus Falls. Condolences may be sent online at www.olsonfuneralhome.com

Duane Leroy Tollefson, 86, of Fergus Falls (formerly Richfield, MN), went to meet his Lord and Savior Jesus Christ on the evening of July 29, 2019 surrounded by his loving family Duane was born to Bernard and Mabel Tollefson on May 28, 1933... View Obituary & Service Information

The family of Duane L Tollefson created this Life Tributes page to make it easy to share your memories.