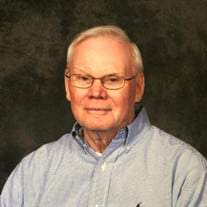 Duane Francis Larson, 93, lifelong resident of Fergus Falls, passed away peacefully of natural causes during the late hours of Sunday, September 19, 2021, his daughter Kathleen at his side. Duane was born on October 14, 1927, the son of Albert “A.K.” and Selma “Sally” Larson, and brother of John. He graduated from Fergus Falls High School in 1945, and was inducted into their Hall of Fame in 2019. After high school, he enlisted in the Army Specialized Training and Reserve Program, where he received accelerated engineering training, and was assigned to the Army Air Force, where he served as a Weather Observer until his honorable discharge in 1947. In 1957, he earned his diploma from the University of Wisconsin Madison Graduate School of Banking. He married Mary Bocnuk on September 10, 1960, at Grace United Methodist Church, in Fergus Falls, and remained a devoted husband after her death in July 2009. Together they built a home, and raised two children, James and Kathleen. A distinguished member of the financial community, Mr. Larson worked for Fergus Falls National Bank (later Wells Fargo) from 1947 to 1992, retiring as Vice President of Commercial Banking, having served on the Board of Directors. He “flunked” retirement though, and joined West Central Initiative Fund, doing loan review credit analysis from 1995 until his second retirement in 2020. Duane loved baking (delicious) cookies, golf, hunting, fishing and music. A virtuoso of the flute and piccolo, he loved sharing his gift as a frequent guest soloist at local churches. He was a charter member of the Fergus Falls Civic Orchestra for over 50 seasons, a member of the Heart of the Lakes Community Band for over 20 years, and a longtime member of the M State Community College Concert Band. He was also a member of the Upper Midwest Flute Association, Kiwanis, and Grace United Methodist Church since his baptism. Duane was memorialized on Sunday, September 26, 2021, in a small service for his family at Grace United Methodist Church in Fergus Falls. He was laid to rest in the family plot at Oak Grove cemetery, next to his parents, his wife Mary, and infant daughter Mary Frances. A “gentleman and a gentle man,” Duane is survived by his beloved family: son James Larson, daughter Kathleen Larson (James Moore), granddaughters Grace and Sophia Larson, sister-in-law Iris (John-deceased) Larson, and a niece Patsy (Edward) Tighe. Plans for further memorials to be announced.

Duane Francis Larson, 93, lifelong resident of Fergus Falls, passed away peacefully of natural causes during the late hours of Sunday, September 19, 2021, his daughter Kathleen at his side. Duane was born on October 14, 1927, the son of Albert... View Obituary & Service Information

The family of Duane F. Larson created this Life Tributes page to make it easy to share your memories.