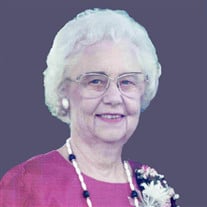 E. Dorothy Skramstad, 90, of Fergus Falls, died Thursday, February 22, 2018, at Pioneer Cottages in Fergus Falls, MN, following a fever and diabetes-related illness. She was born on October 20, 1927. Dorothy grew up in Montevideo, MN, where she graduated from high school and worked as a secretary. In December of 1946, Dorothy married John Skramstad. The couple raised four children together, living in Minnesota, North and South Dakota, and finally settling in Fergus Falls, MN, in 1962. Dorothy worked as a church secretary for 25 years and held a number of volunteer positions as an adult. She celebrated her 90th birthday with family in October 2017, at the Pioneer Cottages where she had resided since a year following the death of her husband John in 2016. Survivors include her children, Richard, Margaret, Ruth, and Kathy; 5 grandchildren; and 5 great-grandchildren. Visitation: 2-4 p.m. Sunday, March 18, 2018, at the Olson Funeral Home in Fergus Falls, and resumes one hour prior to the service at the church Service: 11 a.m. Monday, March 19, 2018, at First Lutheran Church in Fergus Falls Clergy: Reverend Marcus Kunz Interment: Oak Grove Cemetery, Fergus Falls, MN Arrangements are provided by the Olson Funeral Home in Fergus Falls. Online condolences may be sent to www.OlsonFuneralHome.com

The family of Dorothy Skramstad created this Life Tributes page to make it easy to share your memories.