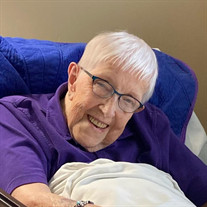 Dorothy M. Metcalf, 97, of Fergus Falls, died January 1, 2022, at PioneerCare Center. She was born August 11, 1924, in Lake City, the daughter of Howard James and Edna Louise (Dammann) Kirkwood. Growing up in Lake City, she graduated from high school there. Dorothy was a bookkeeper at the gas station/body shop in Lake City, where she met her future husband, Jim. They were married On October 15, 1949 in St. Paul. They made their home in St. Paul, where she went to work at the Arsenal, making ammunition. Later, they moved to Thief River Falls, where she was a stay at home mom when their son, James Allen II was born. In 1958, they move to Fergus Falls where she worked for Beltone Hearing Aid, later worked for MidAm Dairy, working as an office bookkeeper and later moved to the Farm Store, retiring in 1987. After her retirement, they started a new job merchandising venture, which allowed them to travel to various cities in MN. Dorothy and Jim lived at East Lost Lake from 1976-1993. She was a member of Augustana Lutheran Church. She enjoyed playing solitaire, Pokeno and Bingo, reading books, going to various Elks Lodge functions with Jim, and watching the MN Twins and Vikings. Preceding her in death were her parents and her husband, Jim. Survivors include her son, James Allen (Wendy) Metcalf II of Fergus Falls; grandchildren, Todd (Sarah Fulton) Metcalf and Tony (Hallie) Metcalf; great-grandchildren Grace, Katelyn, Ella, Joseph, Brady and Alexis. Visitation: one hour prior to the service at the funeral home Service: 3 pm Saturday, January 8, 2022, at the Olson Funeral Home. Fergus Falls Interment: Oak Grove Cemetery, Fergus Falls Olson Funeral Home of Fergus Falls is in charge of arrangements Condolences may be sent online at www.olsonfuneralhome.com

Dorothy M. Metcalf, 97, of Fergus Falls, died January 1, 2022, at PioneerCare Center. She was born August 11, 1924, in Lake City, the daughter of Howard James and Edna Louise (Dammann) Kirkwood. Growing up in Lake City, she graduated from... View Obituary & Service Information

The family of Dorothy M Metcalf created this Life Tributes page to make it easy to share your memories.