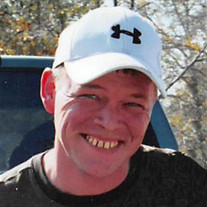 Donovan Richard Braeger, 44, of Fergus Falls, died Monday, September 10, 2018, at Sanford in Fargo, ND. He was born January 8, 1974, in Alexandria, the son of James and Cheryl (Asleson) Braeger. He attended school in Fergus Falls. He was employed as a cook at Dairyland, drove truck for Coca-Cola and Spee-Dee Delivery, all of Fergus Falls, was an office manager and did construction work. On May 12, 2001, he married Julie Michaelson at Our Lady of Victory Catholic Church, Fergus Falls. Together they had two daughters. Donovan enjoyed the Minnesota Vikings, fantasy football, bowling, and played on local softball teams. He also enjoyed deer hunting and processing the deer. He especially loved watching his two girls with their activities and sports. He was a great cook, known for his omelets. Preceding him in death were his mother, Cheryl Holte and his grandparents. Survivors include his two daughters, McKenzy and Karley both of Fergus Falls; his father, James and his wife, Judie of Leonard, ND; two brothers, Kenneth (Dena) Braeger of Ft. Knox, KY and Tony (Zoey) Braeger of Poulsbo, WA; Judie’s children, Melissa Maxwell of Fargo, ND, Sarah Brunsberg of Fargo, ND and Derek (Nicky) Brunsberg of Becker, MN; his stepfather, Leslie (Lana) Holte of Fergus Falls along with several nieces, nephews, aunts and uncles. There will be a celebration of Donovan’s life at the Olson Funeral Home, Saturday, September 15, 2018, at 1:00 p.m. with Father Alan Wielinski officiating. There will be visitation one hour prior to the service. Please wear MN Vikings or Fergus Falls Otter apparel for the celebration. online condolences may be sent to www.olsonfuneralhome.com

Donovan Richard Braeger, 44, of Fergus Falls, died Monday, September 10, 2018, at Sanford in Fargo, ND. He was born January 8, 1974, in Alexandria, the son of James and Cheryl (Asleson) Braeger. He attended school in Fergus Falls. He was... View Obituary & Service Information

The family of Donovan Richard Braeger created this Life Tributes page to make it easy to share your memories.