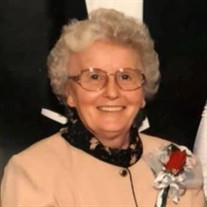 Donna A. Johnson was born March 12, 1931, in Pelican Rapids, MN, the daughter of Sophus Peterson and Alma (Evenson) Peterson. On January 11, 2021, she passed away at the age of 89 at Pioneer Care in Fergus Falls, MN. Donna was a lifelong resident of Pelican Rapids, MN who was baptized on June 27, 1931, and confirmed June 11, 1944, at Ringsaker Lutheran Church. Donna was united in marriage to Omer L. Johnson on May 11, 1947, at Ringsaker Parsonage in Pelican Rapids, MN. They had two children, son, Everett Johnson and daughter, Karen (Johnson) Pixley. She was a Sunday School teacher for ten years and served on the stewardship board at Trinity Lutheran Church. During her 20’s, she had worked at Pelican Rapids Farmers Creamery, West Central Turkey’s, and Stetz Locker Plant before retiring as a janitor at Viking Elementary district #548 after 32 years of service in 1993. Donna’s faithful and caring service did not go unnoticed. Throughout her life, Donna was a caregiver to members of her family and many friends and was adored by many. Her friendly acts of kindness to every person she met will be remembered. She is survived by son, Everett (Mary) Johnson and their children, Kristen (Fairchild), Amber (Ottenbacher), Brianne (Joens) and Brandon Johnson; daughter, Karen (Jim) Pixley of Pelican Rapids and their daughter, Sarah; 12 great-grandchildren, Rachel, Zach, Jordan, Jacob, Dominic, Aubrey, Maddex, Avery, Jarah, Gabby, Haevyn, and Evelyn; and sister, Luella Meyer. She is preceded in death by her husband, Omer; infant son, Kenneth and grandson, Adam Pixley; her parents, Sophus and Alma Peterson; sisters, Lorraine Swanson, Alice Samuelson, Marlys Olson, and Elna Larson; brothers, Wilhelm Peterson, Oscar Peterson, Donald Peterson, James Peterson, Stanley Peterson, and Harry Peterson. A Celebration of Life will be held at 10:30 a.m. on Friday, June 4, 2021, at Trinity Lutheran Church in Pelican Rapids, MN. Clergy: Reverend Eric Schwirian Arrangements are provided by the Olson Funeral Home in Fergus Falls. Online condolences may be sent to www.olsonfuneralhome.com May Donna rest in peace and may her memory live on.

Donna A. Johnson was born March 12, 1931, in Pelican Rapids, MN, the daughter of Sophus Peterson and Alma (Evenson) Peterson. On January 11, 2021, she passed away at the age of 89 at Pioneer Care in Fergus Falls, MN. Donna was a lifelong resident... View Obituary & Service Information

The family of Donna Johnson created this Life Tributes page to make it easy to share your memories.