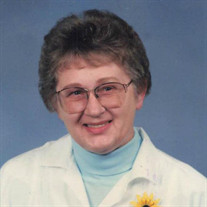 Donna Anderson (Leabo), age 84, of Ottertail, passed away peacefully on May 15, 2021 at the Thomas House in Perham, MN. As a devoted mother and grandmother, her spirit of the rummage sale and the love of her four daughters and their families will forever be cherished in our hearts. Donna’s 84 years on earth were well lived. She graduated from Fergus Falls in 1954 and proceeded to the RN program at Lutheran Deaconess in Minneapolis graduating in 1957. Donna started her career at the Cass Lake Indian Hospital and the Morris Hospital 1957-1958. Donna married Daryl Anderson in 1958 and started her family of four daughters and inspired them with values that will be carried on for many generations. In 1973-1979 Donna and Daryl purchased a resort on Rush Lake, naming it after their four daughters, “Four Seasons Resort”. She was a great manager. This was her initial start of being a “businesswoman”. At the resort there were many fond memories and instilled work ethics that are today appreciated by her daughters. Donna continued to work as a RN at the Perham Nursing Home (1979-1983) and Wadena Community Action as Coordinator of Family Planning Program (1990- 1994). The Rush Lake home was the start of their Antique Business 1981-1988. In 1994 she purchased a small home to be moved to her property and Ottertail Antiques opened. Her knowledge of the antique world and collectibles opened the door for many friends and relationships to be built. Donna’s joy was when a customer or family would drive up. She was generous and proud of her business. She had many hobbies including crocheting, ceramics, rosemaling, quilting with intent to bless her daughters and grandchildren with keepsakes. We will treasure our memories of her as a mother, grandma, antique dealer, and friend. Donna will be remembered and forever missed by daughters, Rhonda Paulson, Sherri Hecker (Edward), Bonnie Wangerin (Don), Barb Matthews (Keith); siblings, Arvin Leabo (Carolyn), Linda Boyer, Lana Ludwig (Steve); grandchildren, Daryl Schleeter, Joseph Schleeter, Ashley Asuzu, Jack Wangerin, Mika Paulson, Zachary Paulson, Kristen Matthews Bravo, Alex Matthews, Demetrius Wangerin, and her great grandchildren: Eli, Felicity, and Jasper. She was preceded in death by her parents, Alfin Leabo, Dorothy Jenson (Leabo); brother, Robert Leabo, and husband of 32 years, Daryl Anderson. Memorials are preferred to the Vang Cemetery Association and Morning Watch. Visitation: One-hour prior to the service at the funeral home. Service: 1:00 p.m. Thursday, May 20, 2021, at the Olson Funeral Home in Fergus Falls. Clergy: Reverend Dennis Preston Interment: Vang Cemetery, Fergus Falls, MN Arrangements are provided by the Olson Funeral Home in Fergus Falls. Online condolences may be sent to www.OlsonFuneralHome.com

Donna Anderson (Leabo), age 84, of Ottertail, passed away peacefully on May 15, 2021 at the Thomas House in Perham, MN. As a devoted mother and grandmother, her spirit of the rummage sale and the love of her four daughters and their families... View Obituary & Service Information

The family of Donna Anderson created this Life Tributes page to make it easy to share your memories.