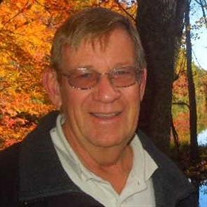 Donald “Don” Evan Westra, 69, a resident of Fergus Falls, died Saturday, December 21, 2019, in his sleep with his wife by his side. Don was born on October 4, 1950, to Sam and Johanna (Sinkey) Westra in Le Mars, IA. He attended grade school at Ireton Christian School in Ireton, IA, high school at Unity High School in Orange City, IA graduating in 1968 and then went to Northwest Iowa Technical College graduating in 1973 with a degree in Mechanical Engineering. Don served in the Iowa Air National Guard from 1968-1972. On December 29, 1973, Don married Maryjane Hartz in Byron, Illinois with her father officiating and Don’s father accompanying the bride down the aisle. After high school Don worked in a meat packing house. This experience he credits as the catalyst for getting him to go to college and to study engineering. Starting in 1973, Don worked as an engineer for Coilcraft, Inc. in Cary, Illinois, where he stayed for 17 years. In 1990, he moved his family to Fergus Falls, Minnesota for a better life for his children. With a few used machines on a flatbed truck, he founded West Tool & Design, Inc. He grew the company and in 2009, left the business to his son, Evan, to manage. He followed his dream of living overseas, doing sustainable development, farming and well drilling in Mt. Selinda, Zimbabwe and vocational education in Yoro, Yoro, Honduras. He returned to Fergus Falls in 2017 to retire. Failing retirement, he began a small business called, Fix It Now, helping people with home repairs. He was a founding member and past president of Sunrise Rotary, Fergus Falls, founding member of Chipinge Rotary Club, Chipinge, Zimbabwe, and a member of Villa Real Rotary Club, Tegucigalpa, Honduras. He was a charter member and past president of Tri-State Manufacturers Association, he was past president of the Economic Improvement Commission of Fergus Falls, and a member of The Federated Church and its choir. Don liked fixing stuff. He was never happier than with a hammer in his hand and dirt under his fingernails. He enjoyed being at Eagle Lake, preferring to be on or near the water, but not in it. He enjoyed tinkering with boats and his ’51 Chevy pick-up. He liked fishing, reading, and playing solitaire on his computer. He enjoyed yelling at the Chicago Bears on Sunday afternoons and at MSNBC during the week. He also enjoyed his shared role of caretaking for his sister-in-law, Martha. He will be remembered as a doer. Just call Don if you needed a sink unplugged or a room remodeled. If he didn’t know how to do it, he acted like he did and figured it out with the help of YouTube University. He enjoyed driving the Motorhome to far places for hours on end, stopping only when nature calls. Don’t ask Don to scuba dive with you, eat green vegetables or ride a motorcycle. Don lived life to the fullest and followed his dreams. Preceding him in death are his parents and daughter, Abigail Susan. Don is survived by his wife, Maryjane of Fergus Falls; children, Evan (Tanya) Westra of Battle Lake, Jacob Marguson of Fergus Falls, Kristina (John) Allen of Tampa, FL, Glen (Hannah) Westra of Fergus Falls, Michael Freise of Fergus Falls, Luke Westra of Hastings, Mary (Jamie Lange) Westra of Fergus Falls, and Vanessa Westra of Hastings; grandchildren, Hayden, Paige, Rachel, Madelyn, Haylee, and Arthur; great-grandchild on the way; brothers, Marlin (Myrna) Westra of Sioux Falls, SD and Eldon (Marcia) Westra of Sioux Center, IA; sister-in-law, Martha Hartz, and numerous cousins, nieces, and nephews. In lieu of flowers, memorials are preferred to CEVER Technical College in Yoro, Yoro, Honduras. Visitation: 4-7 p.m. Thursday, December 26, 2019 at the funeral home with a 6:30 p.m. time for sharing, and resumes one hour prior to the service at the church Service: 4:00 p.m. Friday, December 27, 2019, at The Federated Church in Fergus Falls Clergy: Rev. Dr. Douglas Dent and Dean Eggermont Funeral Home: Olson Funeral Home in Fergus Falls Condolences may be sent online at www.olsonfuneralhome.com

The family of Donald E. Westra created this Life Tributes page to make it easy to share your memories.