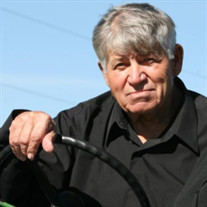 Donald Stoering Sr., 86, of Dent, died Tuesday, January 15, 2019, at PioneerCare in Fergus Falls surrounded by his family. Donald was born on May 27, 1932, in Fergus Falls, the son of Fred and Alvina (Matz) Stoering. Alvina died in childbirth, but because his father remarried, he grew up knowing Bertha as his mother and he as her son in Dent, MN, on his father’s family farm. He attended country school at District 129 in rural Dent. He graduated from Perham High School in 1950, where he was an all-conference football player. On June 4, 1952, he married the love of his life, Helen Ott at Immanuel Lutheran Church in Dent, MN. They celebrated 60 years of marriage with a family celebration at the farm. Together they raised their four children and lived and worked on the family farm. He was a dairy farmer until he sold his herd and worked for his sons at the Perham livestock auction and their other businesses until he retired. Donald was baptized, confirmed, married and was a lifelong member of Immanuel Lutheran Church. He was an avid hunter and enjoyed watching the Vikings, Bison and Twins. He enjoyed his yellow farm cats and anything John Deere. After retirement he became a skilled grill master and enjoyed cooking Sunday dinner for his family. Preceding him in death were his parents; and wife, Helen, who died in October of 2012. Survivors include his children, Kay Brown of Edina, Donald of Minneapolis, John (Anita) of Sauk Rapids, Roy (Tammy) of Dent; grandchildren, Elizabeth (Charlie) Werness of Edina, Ashley Stoering of Minneapolis, Lindsay (Kory) Schlauderaff of Detroit Lakes, Tyler Stoering of St. Cloud, Lesley (Nick) Butze of Moorhead, Nicole Stoering of Fargo; great-grandchildren, Tora, Siri, Asher, Hayden, Hudson and Harrison. Donald will be remembered for his love of his family, the land and time spent watching the lake and God’s creatures; especially the birds at his feeders and the deer who frequented his yard. Visitation: 9-11 a.m. Tuesday, January 22, 2019 at the church. Service: 11 a.m. Tuesday, January 22, 2019, at Immanuel Lutheran Church, Dent, MN Clergy: Reverend Dan Abrahams Interment: Immanuel Lutheran Church Cemetery, Dent, MN Olson Funeral Home in Fergus Falls is in charge of the arrangements.

Donald Stoering Sr., 86, of Dent, died Tuesday, January 15, 2019, at PioneerCare in Fergus Falls surrounded by his family. Donald was born on May 27, 1932, in Fergus Falls, the son of Fred and Alvina (Matz) Stoering. Alvina died in childbirth,... View Obituary & Service Information

The family of Donald Herman Stoering created this Life Tributes page to make it easy to share your memories.