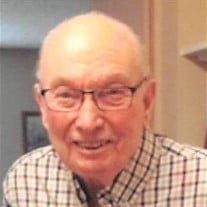 Donald James Rasmusson, 86, of Fergus Falls, died Saturday, October 20, 2018 at PioneerCare in Fergus Falls, Minnesota. He was born May 5, 1932, in Pelican Rapids to Arthur and Ida (Tollefson) Rasmussen. In 1941, when Don was the age of seven,... View Obituary & Service Information

The family of Donald James Rasmusson created this Life Tributes page to make it easy to share your memories.