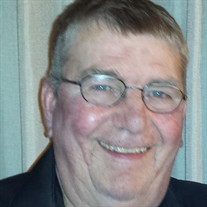 Donald E. Klaksvik, 70, of Underwood, died Sunday, September 2, 2018, at home with family by his side. Donald Eugene Klaksvik, son of Selvin and Lorraine (Wold) Klaksvik was born on November 3, 1947 in Fergus Falls, MN. He grew up and attended Scramstad Country School and graduated from Underwood High School. After proudly serving his country from 1965-1968 in the US Navy as a Seabee in Vietnam, he worked road construction for two years on I-90 in southern MN. He married Judith Pedersen and returned to his hometown of Underwood, MN to grain and dairy farm with his father. He loved farming and raising his three children in the country. He married Sandy Kolstad in 2007 and continued working the land that he loved. Don was a member of Spirit of Hope Lutheran Church-LCMC and loved his church family there. As a previous member of Tingvold Lutheran Church he served in many capacities on the Council. He also served on the board of the Underwood Coop Creamery and the American Legion, of which he was a member for 51 years. He enjoyed the small things in life like a new baby calf, the smell of fresh mown hay, the color of a good corn crop, road trips to check crops, and eating out once in a while. He was the most giving man, always thinking of ways to help someone else in need, whether it be a meal, a jacket, a ride somewhere, or a $20 bill. Don was kind, gentle, a hard worker, and had a great sense of humor. He loved his family with his whole heart and he loved his Lord and Savior. He was preceded in death by his parents, sister and brother-in-law, Mary and Roger Farsdale, brother-in-law Joel Ebert, and special friend Martin Amsler. He is survived by his best friend and wife, Sandy; his service dog, Mason; children Kristen (Brian) Hovland; Dana (Starrla) Klaksvik; Jill (Lance) Roisum; their mother, Judy Klaksvik; and 6 grandchildren, Sydney and Brooke Hovland, Olivia and Levi Klaksvik, and Anna and Andon Roisum. He is also survived by Bruce (Jen) Albjerg, whom he thought of and loved as a son, and their children, Annie, Emmy, Mily and Johanna; and by Sandy’s two sons, Matthew Kolstad, Nathan (Kristen) Kolman and their children, Isaak Kolstad, Dylan Kolman, Wesley and Brandon Papp. He also leaves one sister, Sue (Ron Leier) Ebert of Rochester, MN, one aunt, Doris Schoening of Fergus Falls; sisters-in-law Sue (Bob) Klein, Carol (John) Hamann, Beth (Emory) Splitt; several nieces, nephews and cousins; and countless friends. Visitation: 5-7 p.m. Wednesday, September 5, 2018 with a prayer service at 6:30 p.m. resuming one hour prior to the service Service: 11 a.m. Thursday, September 6, 2018 at the Olson Funeral Home, Fergus Falls Clergy: Reverend Todd Hylden Military Participation: Underwood American Legion Post 489 Interment: Tingvold, rural Underwood Olson Funeral Home, Fergus Falls is in charge of arrangements Online condolences may be sent to www.olsonfuneralhome.com

Donald E. Klaksvik, 70, of Underwood, died Sunday, September 2, 2018, at home with family by his side. Donald Eugene Klaksvik, son of Selvin and Lorraine (Wold) Klaksvik was born on November 3, 1947 in Fergus Falls, MN. He grew up and attended... View Obituary & Service Information

The family of Donald E. "Don" Klaksvik created this Life Tributes page to make it easy to share your memories.