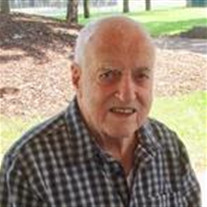 Donald (Don) Elliott, 97, of Hopkins, MN, formerly of Fergus Falls, died Sunday, December 8, 2019, at The Glenn Hopkins Senior Living Center in Hopkins, MN. Don was born December 31, 1921, in Fergus Falls to Clarence and Grace (Cook) Elliott. He graduated from Washington High School in 1939. After graduating from high school Don worked for the family business, Elliott Transportation Bus Service until he enlisted in the US Navy. Don served in the US Navy for three and a half years serving in WWII. He served as a navigator on a PT boat in the South Pacific campaign. He was honorably discharged December 17, 1945 with the rank of Quartermaster First Class. He was proud of his military service. On January 11, 1946 he married the love of his life Virginia (Virgie) Loeffler in Fergus Falls where they enjoyed life together for 66 years. Don spent most of his working career with John Mark Sand & Gravel Company retiring in 1985. After retirement Don & Virgie enjoyed traveling throughout the United States & Canada with their motor home. They visited every state except Hawaii. In earlier years they loved to roller skate & dance. Don was a long-time member of the Elks, VFW & American Legion. Don was preceded in death by his wife, Virginia in 2012; parents, Clarence and Grace; brothers, Wallace and Earl; sisters, Evelyn Melting and twin sister Dorothy Engen. He is survived by his daughter, Sherie (Lonny) Thimjon of Hopkins, MN; grandchildren, Tonia (Nate) Boike of Eden Prairie, MN and Jason (Rachel) Thimjon of Apple Valley, MN; great-grandchildren, Kameron, Caden, and Jack Boike and Nadia and Givenson Thimjon, and sister, Geraldine Melby of Fergus Falls. Burial will take place at St. Otto's Catholic Cemetery.Tentatively a memorial gathering will be held when current conditions allow. Arrangements are provided by the Olson Funeral Home in Fergus Falls. Online condolences may be sent to www.olsonfuneralhome.com

The family of Donald J Elliott created this Life Tributes page to make it easy to share your memories.