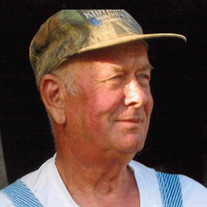 Donald Skogstad, 88, of Fergus Falls died Wednesday, August 14, 2019 at Life Song Residence in Fergus Falls, six days before his 89th birthday. Donald Elroy Skogstad was born August 20, 1930, in Stevens County, Swan Lake Township in Minnesota to George and Esther (Torgerson) Skogstad. He was baptized at Scandia Lutheran Church and grew up on the family farm, north of Cyrus, Minnesota. Don attended District 66 rural school until he went to Cyrus High School, graduating in 1948. In school Don played basketball and baseball but his real love was 4-H. He raised various animals and showed them at the Stevens County Fair and the MN State Fair. He loved farming with his father, George, his uncles and neighbors. He was able to purchase farmland from two uncles and his mother, Esther. He was a hardworking and patient farmer. When other farmers, over their coffee, were complaining about poor field conditions, Don would go out later in the day and work for a couple hours. He would be finished when others were just starting. Don and his family were members of Scandia Lutheran Church until it merged into the Cyrus Trinity Lutheran Church, where he was confirmed. On Don’s birthday in 1986 he went to Fergus Falls to buy a car. There he met salesperson, Joyce Behrens. They were married at the family farm on July 7, 1990. He became more than a friend to Joyce’s four children and promised to be a good grandpa. Don and Joyce enjoyed learning to square dance, camping, good friends, playing cards, travel, and especially going “south” for several years. After some health issues, Don said he thought he ought to move at least once in his life. Don and Joyce moved to Fergus Falls in 2007 where they became members of Bethlehem Lutheran Church. In May 2017, Don moved to Life Song Residence in Fergus Falls as a result of Parkinson’s and strokes. He was preceded in death by his parents; sister and brother-in-law, Dennis and Betty Anderson; sister, Genevieve Gunvalson, and granddaughter, Tara Schlagel. He is survived by his wife, Joyce; step-children, Lisa (Dale) Mulvaney of Moorhead, Laura (Gary) Hexum of Elizabeth, Karl Behrens of Albuquerque, NM, and Erik (Camille) Behrens of Fargo; grandchildren, Emily, Tom, Jacob (Ellyn), Jessica, Caitlin, Connor, Valerie, Jacquelin, and Kelly; brother-in-law, John Curtis Gunvalson of Woodbury; Don’s nieces and nephews, Jim (Jan) Gunvalson of Woodbury, Bev (Tom) Alsleben of Woodbury, Lonnie (Pat) Anderson of Morris, Mary (Pete) Royer of Litchfield, and Jill (Brett) Johnson of Elk River, and many great and great-great nieces and nephews. In lieu of flowers, memorials are preferred to Bethlehem Deacons Fund in Fergus Falls and Trinity Lutheran Cemetery in Cyrus. Due to construction please take HWY 59 S to Morris, then East on HWY 28 to Cyrus. Visitation: Monday, August 19, 2019 from 5:00-7:00 p.m. with a prayer service at 6:30 p.m. at the Olson Funeral Home in Fergus Falls. Pastor Stan Satre will be officiating. Visitation will resume one-hour prior to the service at the church. Service: Tuesday, August 20, 2019 at 10:30 a.m. at Trinity Lutheran Church in Cyrus, MN Clergy: Reverend Chris Richards Interment: Scandia East Cemetery in Cyrus, MN Arrangements are provided by the Olson Funeral Home in Fergus Falls. Online condolences may be sent online at www.OlsonFuneralHome.com

The family of Donald "Don" Elroy Skogstad created this Life Tributes page to make it easy to share your memories.