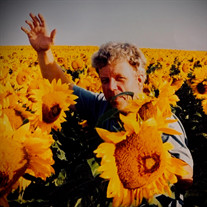 Dewayne William Sjostrand, 74, formerly of Hazen, ND and recently of Kentucky passed away on the evening of Wednesday, January 12, 2022 at Louisville East Post-Acute Care Center in Louisville after a twenty-five-year battle with Parkinson’s disease. Services will be held at 11:00 AM CST on Friday, January 21, 2022 at Olson Funeral Home in Fergus Falls, MN with Pastor Rich Cook officiating. Burial will take place at Knollwood Cemetery in Fergus Falls immediately following the service. Dewayne was born November 10, 1947 in Hallock, MN to Chester and Nancy (Anderson) Sjostrand. Dewayne graduated from Hallock High School in 1965 and furthered his education at the Minneapolis Vocational High School and Technical Institute before enlisting in the United States Army, earning the rank of sergeant. Dewayne served in both Vietnam and Alaska as a radio relay operator in the signal corp before receiving his honorable discharge in 1970. Dewayne then enrolled at Moorhead State College in Moorhead, MN and earned a bachelor’s degree in industrial technology. While attending MSC, he became an on-air announcer for KFNW, a Christian radio station broadcasting out of Fargo ND. Dewayne was active with the Navigators, a collegiate ministry, and it was through this ministry that he met and quickly married his best friend, Linda Wentzel in 1972. Dewayne stepped away from broadcasting briefly in the mid-seventies when he was hired by the EF Johnson company in Waseca, MN. In 1977, Dewayne moved his family which now included a son and a daughter, Aaron and Bethany, back to Moorhead where he once again took a position behind a microphone with KFNW. As the 1970’s drew to a close, Dewayne made the difficult choice to change careers and began working toward his electrician’s license. This required that he move his growing family to western North Dakota where he would be employed in conjunction with the developing power plants in the region and for many years with Basin Electric Power Cooperative. He settled his family in Hazen, ND in 1979. Dewayne and Linda completed their young family with the birth of Ann that winter. He would spend the remaining years of his life demonstrating the love of his Savior, Jesus, to his family and to those around him. Hazen easily and completely became Dewayne’s home. He built lifelong relationships with his coworkers and most certainly with his church families from Beulah Baptist and New Bethel Congregational churches. Dewayne was a volunteer firefighter and rescue squad member. He was active in Scouting and was a member of the Gideons. He loved camping and fishing. He was well known for his musical ability and the way he’d write Christmas letters, and for being someone who would step up to meet a need, but he found the most joy being present with his family and friends. After the passing of Linda, Dewayne joined Aaron and his family in Kentucky and was introduced to a new group of treasured friends. Dewayne is survived by his children, Aaron (Erica) Sjostrand of Fisherville, KY; Bethany (Kyle) Scammon of Dickinson, ND; and Ann Sjostrand of Fargo, ND; his grandchildren Titus, Clara, Jesse, Shaun, and Maddie; his brothers-in-law Hal (June) Wentzel of Moorhead, MN, Richard (Deb) Wentzel of Underwood, MN; his sisters-in-law Darlene (Jeff) Hass of Fort Ransom, ND; and Lynette (Duane) Dornbusch of Fergus Falls, MN; and his beloved cousins, nieces, and nephews, and their children. Dewayne was preceded in death by his wife, Linda; his parents, Chester and Nancy; his parents-in-law, Harold and Marie Wentzel, and his brother-in-law, Stuart Cox. In lieu of flowers, gifts to the Gideons International would be appreciated, either using memorial cards from the Funeral Home or by going to www.gideons.org. Arrangements are provided by Olson Funeral Home in Fergus Falls. Online condolences may be sent to www.olsonfuneralhome.com

Dewayne William Sjostrand, 74, formerly of Hazen, ND and recently of Kentucky passed away on the evening of Wednesday, January 12, 2022 at Louisville East Post-Acute Care Center in Louisville after a twenty-five-year battle with Parkinson&#8217;s... View Obituary & Service Information

The family of Dewayne Sjostrand created this Life Tributes page to make it easy to share your memories.