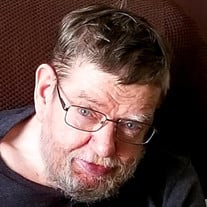 Dennis Carl Synstelien, 77, passed away Thursday, May 7, 2020, at PioneerCare in Fergus Falls. Dennis was born on December 22, 1942, to Carl and Palma (Dahlager) Synstelien at Wright Memorial Hospital in Fergus Falls. He attended school in Fergus Falls, graduating in 1960. After high school he worked at Walt’s Repair, Hoff’s TV Repair, and at Ten Mile Lake Resort. On March 6, 1964, he married Bonnie Larsan in Wheaton, MN. In 1965 he began a 35-year career at the Regional Treatment Center in Fergus Falls, retiring in 2000. Dennis enjoyed playing softball, bowling, pool, and darts, participating in many leagues over the years. He loved painting and drawing, and was an excellent joke teller. He was an avid Twins and Vikings fan, rarely missing a game. Most of all he loved his family and the daily phone calls and visits from his kids and grandchildren. Dennis was a man of few words, but always had a smile on his face and a twinkle in his eye. Preceding him in death were his parents, Carl and Palma; sisters and their spouses, Dorothy (Ivan) Kaasa, Jeanette (Ronald) Brown, and Eunice (Jerry) Hanson; brothers, Earl (Margo)Synstelien and Jerome Synstelien, and a grandson, Justin Fiedler. Dennis is survived by his children, Brenda (Dean) Wasvick, Julie (Rob) Fiedler, and Kevin Synstelien; grandchildren, Tina (Ben Formo) Davis, Jared Dewey, Anna Synstelien, and Tara Fiedler; great-grandchildren, Lily, Laiden, and Evangelina Davis, Jayda Emerson-Dewey, Aailah and Haiden Dewey, and numerous nieces and nephews. There will be a family graveside service at Our Saviors Cemetery in Dalton, with Reverend Mark Johnson officiating. Please refer back to the funeral home website for a video of the graveside service. Arrangements are provided by the Olson Funeral Home in Fergus Falls. Online condolences may be sent to www.olsonfuneralhome.com

Dennis Carl Synstelien, 77, passed away Thursday, May 7, 2020, at PioneerCare in Fergus Falls. Dennis was born on December 22, 1942, to Carl and Palma (Dahlager) Synstelien at Wright Memorial Hospital in Fergus Falls. He attended school in... View Obituary & Service Information

The family of Dennis Synstelien created this Life Tributes page to make it easy to share your memories.