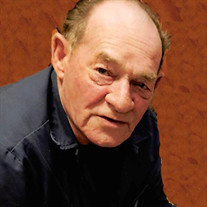 Dennis Harold Murphy “Denny” of Foxhome, MN passed away at the age of 80 years young on April 28, 2019 in Fargo, ND, at Essentia Hospital with his family by his side. Denny was born July 3, 1938, in Andrea Township to Wallace and Myrtle (Lyngstad) Murphy, siblings included Dorothy Gerlach of Detroit Lakes and Donald Murphy of Fergus Falls. He attended school in Breckenridge, MN. Denny was joined in marriage to Joan Krog. This union brought them their children Dale, Dawn and Randy. Denny loved to mow lawns (I always joked with him he mowed half of the town), water flowers, watch Wheel of Fortune and Westerns on television, eating out at Perkin’s and Pizza Ranch, he drove semi-truck for West Central of Foxhome, and would make his daily rounds in town for coffee and conversations, take daily trips to the post office to talk to the post master, he loved eating chocolate, black licorice, and ice cream. His beloved dog Lexi Lu was his life and he was devastated of her passing on January 31, 2019. Denny was the most unselfish, caring, helping, honest, mouthy, and down to earth man we’ve ever known. He was always worried about everyone else and would help anyone with anything and never ask for a thing in return. He was preceded in death by his parents, Wallace and Myrtle; brothers-in-law, Robert (Bob) Steiner and Allen Krog; sister-in-law, Phyllis Murphy and his beloved companion dog, Lexi Lu. He is survived by his three children, Dale of Foxhome, Dawn (Tim) of Ramsey, and Randy of Breckenridge; Joan of Breckenridge; grandchildren, Nacole of Foxhome, Jaime (Zach) of Fergus Falls, Brooke (Andrew) of Ramsey, Allyssa and Ryan of Fergus Falls; great-grandchildren, Taylor of Foxhome and Paisley of Fergus Falls; sister, Dorothy of Detroit Lakes; brother, Donald of Fergus Falls and their families including many nieces and nephews; his very special friend Ellie, as well as numerous friends in the area. Thank you to the first responders and paramedics of Foxhome, emergency staff in Breckenridge, life flight staff, and mostly the wonderful doctors and nurses at Essentia in Fargo, North Dakota who took exceptional care of us all! Visitation: 5 – 7 p.m., on Monday, May 6, 2019, at the Olson Funeral Home, Fergus Falls. Celebration of his golden life at 2:00 p.m., Tuesday, May 7, 2019 at Foxhome Lutheran Church in Foxhome, MN Clergy: Reverend John Andrews Arrangements provided by Olson Funeral Home, Fergus Falls

The family of Dennis H Murphy created this Life Tributes page to make it easy to share your memories.

Dennis Harold Murphy “Denny” of Foxhome, MN passed away at the...