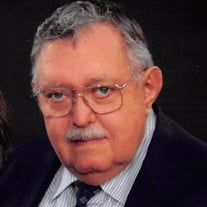 Dennis Lee Danielson, age 77, Jewett Lake, Fergus Falls, passed away peacefully on November 16, 2018 at PioneerCare, Fergus Falls where he was a resident due to his Parkinson’s. Dennis, the son of Lawrence “Johnny” and LaVerne (Simmer) Danielson, was born on April 12, 1941 in Fergus Falls. He attended country school in Akron Township followed by high school at West Central School of Agriculture in Morris, MN., graduating in 1959. On April 21,1962, he married Carolyn Hovland in Fergus Falls and they made their home in rural Rothsay for 47 years where they farmed and raised their three sons. In 2009, Dennis and Carolyn sold the farm site and moved permanently to their home on Jewett Lake. He served on the Akron Township Board and was a member of The Fergus Falls Church of the Nazarene. He loved to work in the garden, bake and cook, read Louis L’ Amour westerns, and wood working. Dennis enjoyed attending his children’s and grandchildren’s activities, driving beet truck for neighboring farmers, traveling, especially on cruises, and spending time at the lake. He always enjoyed his Sunday afternoon Polka Party on the radio. He was preceded in death by his parents, Lawrence “Johnny” and LaVerne Danielson. Left to cherish his memory are his loving wife, Carolyn of 56 years; three sons and hand-picked daughters, Lee and Kirsten, Blaine and Molly, and Curt and Debbie all of Fergus Falls; nine grandchildren, Olivia (Luke) Hoffman, Eben (Alyssa) Danielson, Clay Danielson, Chris Danielson, Stephanie (Jon) Katuin, Cody Danielson, Shelby Danielson, Andrew Danielson, and Sara Danielson; four great grandchildren, Levi, Noah, and Owen Hoffman and Briella Danielson; three brothers, Darwin and Marilyn of Rothsay, David and Wylene of Cokato, and Doug and Shirley of Rothsay, sister-in-law, Marge (Lowell) Wasmuth of Rothsay; and many nieces, nephews and friends. The family would like to extend their appreciation to PioneerCare for the loving care Dennis received there and how they treated him as family. In addition, thank you to LB Hospice for being there in Dennis’ final days of care. Memorials may be directed to PioneerCare or LB Hospice of Fergus Falls. Visitation: 4-7 p.m. Tuesday, November 20, 2018, with a 6:30 p.m. prayer service and will resume one hour prior to the service at Olson Funeral Home. Service: 1:00 p.m. Wednesday, November 21, 2018, at Olson Funeral Home Clergy: Reverend Clay Mitchell, Reverend Steve Hoffman and Chaplain David Strom Interment: Oak Grove Cemetery of Fergus Falls Olson Funeral Home in Fergus Falls is in charge of the arrangements. Online condolences may be sent to www.olsonfuneralhome.com

Dennis Lee Danielson, age 77, Jewett Lake, Fergus Falls, passed away peacefully on November 16, 2018 at PioneerCare, Fergus Falls where he was a resident due to his Parkinson&#8217;s. Dennis, the son of Lawrence &#8220;Johnny&#8221; and LaVerne... View Obituary & Service Information

The family of Dennis Lee Danielson created this Life Tributes page to make it easy to share your memories.