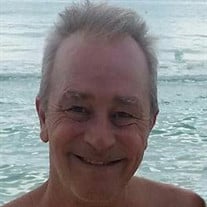 Dean Goodwin Erlandson, 60, a resident of Dalton, died Saturday, August 11, 2018, at his home. He was born on April 11, 1958, to Goodwin Truman and Edith Othelia (Oak) Erlandson. He attended school in Aastad Township through the 6th grade and attended Fergus Falls public school where he graduated in 1976. In 1979 he married Wendy Jo Hanson at Ten Mile Lake Lutheran Church of Dalton. They made their home in Aastad Township and the couple had three children. In 2006 they built their home on Ten Mile Lake in Tumuli Township. His professional life began after high school when he started farming with his dad and as a salesman for a fertilizer company. He continued to farm until 1989 at which time he moved to the construction world. He worked for H&R construction, Jensen Builders and Global Construction for several years. In 1997, he went into partnership with his father selling Kinetico Water Softeners at Valley Soft Water, Ltd. He sold the business when his dad passed in 2008. Since then he has worked for various farmers, most recently he was a truck driver for a fertilizer company. Dean loved eating ribeye steaks, potato chips with french onion dip and telling dad jokes and bad jokes. He also loved going to T-Wolves games with his family, where he would be certain to have two brats and two beers. Dean was a former member in the Wendell Jaycees, and the Wendell Culture Club. He loved his softball tournaments, camping with his family and friends, ice fishing and many nights of board games and cards. Nothing gave Dean more joy in his life than his family. He was relentlessly kind, fair and a very sentimental man. His goodbyes were filled with tender hugs and kisses, and tear-filled eyes. His recent years were spent on the floor playing with his six grandchildren, giving 4-wheeler rides and teaching them how to be his first mates on his pontoon. He also loved spending time at the Lake with his extended family, including his exceptional in-laws Gene and Myrna. Preceding him in death were his parents Goody and Tillie Erlandson. He is survived by his wife Wendy of Dalton; children Thea (Jeremy) Ciancanelli of Lakeville, Joanna (Zack) Tysdal of Fergus Falls and Dean Simon Erlandson of Fergus Falls; grandchildren Sam and Hannah Ciancanelli, Brielle, Ari, Trey and Zeke Tysdal; siblings Jeff Erlandson of Fergus Falls, Gail Edmunds of Ada and Tony (Patty) Erlandson of Fergus Falls; nephews and nieces Luke (Shannon) Evavold, Rachel Evavold, Patrick (Danielle) Knutson and Devin Erlandson. Also surviving are his father and mother-in-law, Eugene and Myrna Hanson of Dalton and sister-in-law, Deirdre (Darin) Evavold of St. Cloud. Visitation: 4-7 p.m. Thursday August 16, 2018, with a prayer service at 6 pm at the funeral home, and resumes one hour prior to the service at the church Service: 2 p.m. Friday, August 17, 2018, at Our Savior’s Ten Mile Lake Church, Dalton Clergy: Reverend Matt Zelie Interment: Ten Mile Cemetery, rural Dalton Funeral Home: Olson Funeral Home in Fergus Falls online condolences may be sent to www.olsonfuneralhome.com

Dean Goodwin Erlandson, 60, a resident of Dalton, died Saturday, August 11, 2018, at his home. He was born on April 11, 1958, to Goodwin Truman and Edith Othelia (Oak) Erlandson. He attended school in Aastad Township through the 6th grade... View Obituary & Service Information

The family of Dean G Erlandson created this Life Tributes page to make it easy to share your memories.