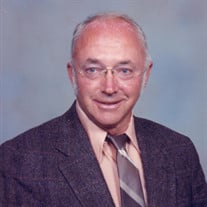 In loving memory of David Milo Velo, who passed away peacefully surrounded by loved ones on May 19, 2021. David was born to Eddie and Leola Velo on December 8, 1939, as the oldest of nine siblings, and lived most of his life in rural Rothsay, Minnesota. He attended school at ISD 78 country school, Pelican Rapids High School and graduated from the University of Minnesota in electrical engineering. He served two years in the Army and was stationed in Germany. Back from military service, David’s lifelong occupation was working on the family farm with his parents and siblings. His greatest passion was flying – occasionally a helicopter, but most often in his cherished Piper Super Cub. That plane launched from Hwy 28 to every state in the continental U.S. One of his favorite adventures was flying down the length of the Grand Canyon – rock walls to either side of his wingtips. His numerous flying vacations would often find him at remote airstrips where he would ride his folding bicycle to campsites, hiking trails and prominent landmarks. Generously, he gave countless plane rides to family, friends and youth interested in aviation. When he flew commercially, it was usually to Hawaii, where he spent time with his cousin near Kona. The only other mode of transportation that met David’s standards were his various Ford Mustangs that he owned over the years, which he babied like a newborn. His white steed was so well trained, it could practically drive itself while he sipped on his favorite beverages – chocolate milk or Pepsi. Taking photos with his many Polaroid cameras was a favorite hobby and he kept meticulously catalogued photograph albums. In his spare time, David satisfied his curious and complex mind with a voracious reading of books and the several newspapers that he subscribed to. Points of interest would be noted using a pen and pad from his handy pocket protector. David was a collector and found value in eclectic items - from a human gyroscope to hamburger telephones to vintage license plates. Because he was a boy scout at heart, he was “prepared” for anything - whether an act of nature or act of man. While in urban areas, he pioneered the concept of the “spare wallet” technique to foil thieves. When David wasn’t flying or farming, he would zoom up to Fargo in his Mustang to go dancing –polkas and waltzes were the favorite. Many nights on the dance floor were twirled away with his girlfriend of 28 years, Linda Schempp. David loved the Star Trek series, and I think if he could have last words to friends and family, it would be a reflection of how he lived his own life – “Live Long & Prosper!” David is survived by his siblings Diane (Lyle) Hovland, LouAnn (David) Wallin, Dale (Mary) Velo , Daryl Velo (former spouse Nita Velo), Cindy (Jack) Westby and SuzAnn (Cal) Stenso-Velo; nieces and nephews Krysta (Mike) Mischel, Kurt (Haili) Hovland, Danton Wallin, Torin Wallin, Jamie (Ezra Smith) Velo, Megan (Victor) Lomeli, Eddie (Piper) Velo, Kelsey Velo, Alanna Velo, Christopher Westby, Marc (Abby) Westby, Michelle Westby, Avery Velo and Solvei Velo; great nieces and nephews Tennyson Mischel, Berkeley Mischel, Isabel Smith, Grace Smith, Haven Hovland, Henley Hovland, Leilani Lomeli, Willa Velo and Silas Velo. David was preceded in death by his parents Eddie & Leola (Trosvik) Velo; brother Ivan Velo; and sister JoAnn Velo. A celebration of life for David will be held at 11:00 on Tuesday, June 1, 2021 at Olson Funeral Home (711 Pebble Lake Road, Fergus Falls, MN 56537). Visitation will start one hour before the service at 10:00. Interment and reception will be held at South Immanuel Lutheran Church (38041 County Hwy 21, Rothsay, MN 56579). In lieu of flowers, please consider a donation to the Minnie Velo Memorial Charitable Trust. Cards, notes and remembrances can be sent to: Olson Funeral Home at address stated above. Arrangements are provided by the Olson Funeral Home in Fergus Falls. Online condolences may be sent to www.olsonfuneralhome.com

In loving memory of David Milo Velo, who passed away peacefully surrounded by loved ones on May 19, 2021. David was born to Eddie and Leola Velo on December 8, 1939, as the oldest of nine siblings, and lived most of his life in rural Rothsay,... View Obituary & Service Information

The family of David Velo created this Life Tributes page to make it easy to share your memories.

In loving memory of David Milo Velo, who passed away peacefully...