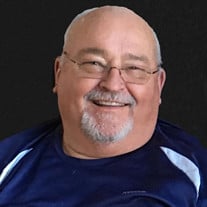 David Lynn Johnson, 74, of rural Battle Lake, died Sunday, May 26, 2019, at the St. Cloud Hospital, St. Cloud. He was born September 18, 1944, in Fergus Falls, the son of Chester and Alpha (Hoff) Johnson. He grew up on the family farm in Aastad Township, rural Fergus Falls, and was baptized and confirmed at Aastad Lutheran Church, rural Fergus Falls. David attended School District 64, rural Fergus Falls, through the 8th grade and graduated from Fergus Falls High School. In June of 1966, he married Judy Herness. They were blessed with two children, Blaine and Lisa. They lived in Fergus Falls for 28 years and in November of 1994, David and Judy moved to their Eagle Lake home, rural Battle Lake. David enlisted in the U.S. Army in October of 1961, and was honorably discharged in August of 1964. He then helped on the family farm, worked for Hoffman Glass Co., Ashby Equity and Fergus Dairy. In 1966, he went to work for the International Harvester dealership in Fergus Falls. In 1982, it became Fergus International and he was a partner in the business. The business was sold in March of 2006, and he continued as the store manager, retiring in September of 2007. In their retirement, David and Judy, enjoyed traveling in their motor home during the winter months. He enjoyed living at the lake, his work, his family, and working on old International tractors, after retirement. He also enjoyed many morning coffee chats at the Big Chief Café. He was a member of Zion Free Lutheran Church of Dalton, the Fergus Falls Elks and Eagles Clubs, and the Ashby Legion. Survivors include his wife, Judy; son Blaine and his boys, Cody and Jacob of Waite Park; daughter, Lisa (Randy) Hohbein and their girls, Rilee and Makenna of Rice; sisters, Nancy Anderson of Savage and Jennifer (Tyler) Erickson of Trinidad, CO; brothers, Daryl (Marlys), Darwin (Diane), and Dean, all of Fergus Falls and Duane (Jana) of Savage; sisters-in-law, Cindy Johnson of Fergus Falls, and LaVay Thompson and Janet (Perry) Kugler of Battle Lake; along with several nieces and nephews. Preceding him in death were his parents; a brother, Dennis, infant brother and sister, Robert and Melissa; brothers-in-law, Jerry Herness and Harley Thompson; sister-in-law, Donna Herness, and his father and mother-in-law, Lyman and Fern Herness. In lieu of flowers, memorials are preferred to Zion-Sarpsborg Free Lutheran Church, Dalton, MN. Visitation: 5-7 p.m. Thursday, with a prayer service at 6:30 p.m., at the funeral home, and will resume one hour prior to the service at the church Service: 11:00 a.m., Friday, May 31, 2019, at Zion-Sarpsborg Free Lutheran Church, Dalton Clergy: Reverend Mark Johnson Interment: Zion Lutheran Cemetery, Dalton Arrangements provided by Olson Funeral Home, Fergus Falls online condolences may be sent to www.olsonfuneralhome.com

David Lynn Johnson, 74, of rural Battle Lake, died Sunday, May 26, 2019, at the St. Cloud Hospital, St. Cloud. He was born September 18, 1944, in Fergus Falls, the son of Chester and Alpha (Hoff) Johnson. He grew up on the family farm in Aastad... View Obituary & Service Information

The family of David Lynn Johnson created this Life Tributes page to make it easy to share your memories.