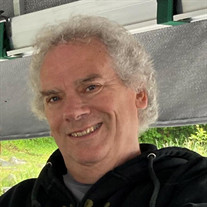 Danny J. Teske, 64, of Fergus Falls, died Saturday, August 14, 2021, at Lake Region Healthcare in Fergus Falls. Danny Joel Teske was born in Appleton, MN, on October 9, 1956, to Delford and Viola Teske, the youngest of four brothers. He was baptized and confirmed at Trinity Lutheran Church in Appleton and graduated from Appleton High School in 1975. During his high school years, he participated in athletics and played the bass drum in the band. He also worked as a lifeguard at the Appleton swimming pool during the summer months. Danny graduated from Hutchinson Area Vocational Technical Institute, Willmar Area Vocational Technical Institute and North Dakota State School of Science with degrees in audiovisual communication, carpentry and architectural drafting. The variety of Danny’s vocational interests and talents led him first to Pioneer Public Broadcasting in Appleton followed by positions in Battle Lake, Alexandria and Fergus Falls areas. Currently, he was employed by TAG-UP in Fergus Falls, where he enjoyed his work and especially his co-workers. He was very appreciative of their support in the last three months as his health declined. Friends describe Dan as a kind and gentle person with a quiet sense of humor that could bring on a grin and chuckle at any moment. He was a confirmed bachelor, a lover of popcorn and Coca Cola, a classic movie buff, and a talented woodworker who followed all the Minnesota sports teams. He also enjoyed photography. Danny spent most weekends and enjoyed time off with his family on Battle Lake and had many good friends in the area. His three nieces adored him and so did the family dogs! He is survived by his three brothers, Larry (Marsha) of Honolulu, HI, Jerome of Battle Lake, and Daryle (Vicki) of Lake Park; along with his nieces, Malia, Lauren and Brynn. He was preceded in death by his parents and his dog nephew, Eddie. Danny felt fortunate to have crossed paths with so many wonderful people in his journey through life. The family would like to express their thanks to Lake Region Healthcare and Ringdahl Ambulance Service. Visitation: one hour prior to the start of the service at the Olson Funeral Home in Fergus Falls Memorial Service: 11:00 a.m. Wednesday, September 8, 2021, at the Olson Funeral Home in Fergus Falls. Please refer back to Danny’s Tribute Wall for a link to live the livestream. Clergy: Reverend David Strom Arrangements are provided by the Olson Funeral Home in Fergus Falls. Online condolences may be sent to www.olsonfuneralhome.com

The family of Danny J. Teske created this Life Tributes page to make it easy to share your memories.