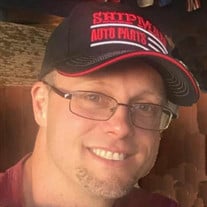 Daniel Thomas Shubitz, 45, of Fergus Falls, died unexpectedly on February 28, 2021. He was born June 26, 1975 to Thomas and Elaine (Boudin) Shubitz. He grew up in Fergus Falls, MN and attended Our Lady of Victory Catholic School, Hillcrest Lutheran Academy and graduated from Fergus Falls High School in 1994. After high school, he attended Detroit Lakes Vocational School for Auto Body and became employed with Minnesota Motor Company Body Shop. He married the love of his life Megan Krueger in 2003 in Detroit Lakes and they resided in Fergus Falls. He was a wonderful and caring person. He was a fixer, if you had a problem or project, chances are Dan could fix it. His passions included motorcycle riding, vintage cars, four wheeling around his 20 acres 'the land', his beloved Nissan 350Z, and of course collecting every gas and oil sign he could find. He loved his garage with his cars. He's owned over 200 cars buying and selling! He enjoyed being a member of the Uninviteds Car Club. Most nice days, you would find him quietly staring at his vehicles, probably contemplating what he was going to buy or sell next. He had a passion for his work, something he was very talented with. Somehow, he could pretty much buff anything out. He loved his job and to make people smile. He loved his friends and family dearly. Although he was a quiet person, his personality and heart were huge. He will always be remembered for his kind and loving self that gave everything he had. Preceding him in death were his mother and father and numerous aunts and uncles. Dan is survived by his loving wife, Megan of Fergus Falls; his beloved pug, Walter; sister, Tara (Nate) Lesner of Carlos; father-in-law, Brad Krueger and mother-in-law, Margaret Krueger both of Detroit Lakes; sisters-in-law, Brittany (Kirk) Anton of Fargo and Annie Krueger of Detroit Lakes; nieces and nephews, Jesse Koslowsky, Keziah Koslowsky, Sierra (Michael) Barton, and Jonah Koslowsky, Kaden and Gavin Anton, Nyles (Mariah) Lesner, Mason Lesner; great-niece and nephew, Elaina Barton, Baby Barton on the way and Bentley Lesner; his dear friends, Jason (Melissa) Shearer, their children Kaylee and Natalee; Paul (Nicky) Swenson. Also surviving is their special “neighborhood family”, along with extended family and friends. Memorials are preferred to Dan’s Family or American Foundation for Suicide Prevention Fargo Chapter https://afsp.donordrive.com/index.cfm?fuseaction=donate.event&eventID=2078 Public Visitation: 2:30 p.m. to 5:00 p.m. Friday, March 5, 2021, at the Olson Funeral Home in Fergus Falls. A private graveside will be held at First Lutheran North Cemetery in Fergus Falls. Arrangements are provided by the Olson Funeral Home in Fergus Falls. Online condolences may be sent to www.olsonfuneralhome.com

Daniel Thomas Shubitz, 45, of Fergus Falls, died unexpectedly on February 28, 2021. He was born June 26, 1975 to Thomas and Elaine (Boudin) Shubitz. He grew up in Fergus Falls, MN and attended Our Lady of Victory Catholic School, Hillcrest... View Obituary & Service Information

The family of Daniel "Dan" Shubitz created this Life Tributes page to make it easy to share your memories.