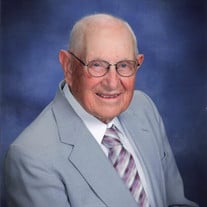 Cyril “Cy” Keller, 98, of Fergus Falls, died Wednesday, October 28, 2020, at Lake Region Healthcare in Fergus Falls. Cyril Nicholas Keller was born April 8, 1922 to Joseph and Agnes (Koziel) Keller. He attended country school through 8th grade near his home. At the age of 20, Cyril joined the Navy where he served as a cook on a Naval Ship and later on the island of Saipan. After serving 3 ½ years, he returned home and began working at a foundry in Fergus Falls. On October 20, 1948, Cyril was united in marriage to Myrtle (Myrt) Budke at Our Lady of Victory Catholic Church in Fergus Falls. At approximately the same time of his marriage to Myrt, he began working for his uncle Anton in Elbow Lake where he and Myrt built their first home. In 1953, he joined his brother Louis’ business, Keller Welding, in Rothsay, Minnesota. They both worked together and in 1956/57 designed and fabricated the first “Keller Self Propelled Loader.” Patent was applied for and granted shortly thereafter. Manufacturing rights for the loader went to Melroe Manufacturing Company in Gwinner, ND shortly after displaying the loader at the 1958 Minnesota State Fair. Both Louis and Cyril then went to work for Melroe Manufacturing Company to manage the fabrication of the first “Melroe Self Propelled Loader.” They then continued to support the selling and improving of this loader which soon evolved into what is known worldwide as the Bobcat Skidsteer Loader. Cyril then took to the road setting up dealerships throughout the United States. His travels eventually included flying across the ocean to countries like England, Germany, and Italy. Throughout the many years of travel, Cyril and Myrt raised their family of eight children. Eventually they moved to Gwinner, ND where Cyril ran a school, training new dealers how to efficiently run the Bobcat. Schools were set up where he would spend six months in Gwinner and six months in San Antonio, Texas, where he ran a tight ship and eventually became known as “Sarge.” On his time off, Cyril enjoyed hunting and fishing trips to Canada, Alaska, and the Great Lakes. He and Myrt also purchased a lake home on Otter Tail Lake where his family enjoyed many years of summer fun. In retirement, Cyril continued tinkering in his shop and inventing, obtaining patents on the Rollabed, rattle reel, and squirrel feeder. Cyril’s deep and abiding faith, strong work ethic, and unfailing honesty and integrity set an example for his children and grandchildren to live up to and strive for. His counsel and advice were always sought after and were always thoughtfully given. He had a zest for life and was happy up until the moment on October 28, 2020 the Lord wrapped his loving arms around Cyril and called him home. This amazing quality inspired everyone around him. He is survived by his two sons, Allen (Becky) Keller and Gary (Lola) Keller; six daughters, Sharon (Mick) Maddock, Linda (Dan) Bettin, Dawn (Joe) Johnson, Bonnie (Curt) Kretchman, Jane (Grant) Tweed, and Ann (Mark) Foner; 23 grandchildren; 17 great-grandchildren; two brothers, Edward Keller and Daniel (Janice) Keller, and three sisters, Eleanor Olson, Mary (Ralph) Carlson, and Audrey Johnson. Cyril was preceded in death by his wife, Myrtle; parents, Joe and Agnes Keller; brother, Louis; seven sisters, Tillie, Janice, Regina, Rita, Irene, Grace, and Dorothy, and special friend, Marjorie Scheidecker. Memorials are preferred to donor's choice. Walk-through Visitation: 5:00 p.m. to 7:00 p.m. Tuesday, November 3, 2020, at Our Lady of Victory Catholic Church in Fergus Falls. There will be a 6:30 p.m. Rosary and a 7:00 p.m. prayer service. Mass of Christian Burial will be a private family service, with a Live-stream at 11:00 a.m., Wednesday, November 4, 2020. Please refer to the Funeral Home website and Cyril’s Tribute Wall for a link to the live-stream. Clergy: Father Alan Wielinski and Father Patrick Hoeft Interment: St. Otto Catholic Cemetery, Fergus Falls, MN Military Participation: Fergus Falls American Legion Post 612 and VFW Post 30 Arrangements are provided by the Olson Funeral Home in Fergus Falls. Online condolences may be sent to www.olsonfuneralhome.com

The family of Cyril "Cy" Keller created this Life Tributes page to make it easy to share your memories.