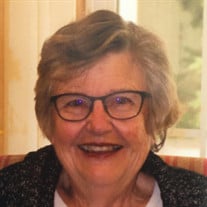 Cynthia A. Johnson, 78, of Fergus Falls died Sunday, October 20, 2019 surrounded by her family. Cynthia (Sether) Johnson was born July 26, 1941, to Sidney and Mildred (Eide) Sether in Fergus Falls. She grew up in Oscar Township and attended primary school in Carlisle. She graduated from Fergus Falls High School in 1959. She was baptized and confirmed at Bethlehem Lutheran Church in Fergus Falls. She graduated from NDSU in 1963 with a Bachelor of Science in Home Economics. While attending NDSU, she was the editor of the yearbook and member of Sigma Psi Chapter of the Kappa Delta Sorority. On February 16, 1963 she married Gordon Johnson at Augustana Lutheran Church in Fergus Falls. Cynthia taught for two years in Columbia, South Carolina where Gordy was stationed in the Army at Fort Jackson. Cynthia and Gordy moved back to Minnesota to Orwell Township where they ran a dairy farm until their retirement. As a couple, they hosted and trained numerous International Agricultural students. The family received numerous awards for their farming and dairy operations. Cynthia enjoyed working as a substitute teacher for many years in the Fergus Falls School District. In the 1990’s, the couple built their home on West Battle Lake. Cynthia was a 4-H participant growing up and served as a 4-H club leader and events judge. She was instrumental in the planning, building, and managing of the 4-H food building at the West Ottertail Fairgrounds with many 4-H friends. As a member of Augustana Lutheran Church, she served as President and Vice-President of the church council and WELCA president. She was active in church Bible Study, programming and she sang in the choir for many years. Cynthia was named the Red River Valley Farm Woman of the Year in 1993 and the Valley Farmer and Homemaker for West Ottertail County in 2004. She was appointed as an initial board member for the Minnesota Center for Rural Policy and Development and served from 1997-2012. She also served on the Pioneer Care Corporate Board from 1996-2005; the Norwest Financial Bank Board; MAST/PART International Program Advisory Committee; Ottertail County Agricultural Advisory Committee, American Dairy Association Board, University of Minnesota Extension Services Board; she was also a volunteer and Board Member of Fergus Falls Area Dollar for Scholars, a member of PEO, and a volunteer to many school and community programs. She was an avid supporter of her children’s and grandchildren’s activities and the surrounding area fine arts and sporting events. She was preceded in death by her parents and her husband, Gordon, who died in 2012. Cynthia is survived by her four children, Todd (Dacia) Johnson, Stephanie (Eric) Johnson, Lisa (Allen) Rezac, and Melissa Johnson; grandchildren, Rachel and Matthew Johnson, Sether, Karsten, and Bjorn Johnson, and Sid, Franklin, and Charlotte Rezac; sisters, Elizabeth Sether and Margaret (Jerry) Rollag; sister-in-law, Connie (Larry) Wahlstrom, and brother-in-law, David (Donna) Johnson; as well as six nephews and numerous cousins. Visitation: 4:00-7:00 p.m., Friday, October 25, 2019, at the Olson Funeral Home, Fergus Falls and will resume one hour prior to the service at the church Service: 11:00 a.m., Saturday, October 26, 2019, at the Augustana Lutheran Church, Fergus Falls, MN Clergy: Reverend Ben Durbin Interment: South Friborg Cemetery, Rural Carlisle, MN In lieu of flowers, memorials may be made to the Fergus Falls Area Dollars for Scholars program or charity of choice.

Cynthia A. Johnson, 78, of Fergus Falls died Sunday, October 20, 2019 surrounded by her family. Cynthia (Sether) Johnson was born July 26, 1941, to Sidney and Mildred (Eide) Sether in Fergus Falls. She grew up in Oscar Township and attended... View Obituary & Service Information

The family of Cynthia Johnson created this Life Tributes page to make it easy to share your memories.