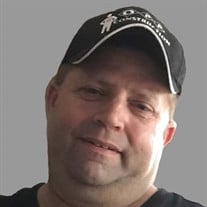 Craig Roger Pederson, 50, a resident of West Fargo ND, died unexpectedly on Tuesday, August 6, 2019 at his home. He was born on January 8,1969, in Fergus Falls, MN to Roger and Bonnie (Martinson) Pederson. Craig was baptized and confirmed at the First United Church of Christ in Fergus Falls. He attended Sunday School and was active in Youth Group. Craig grew up on the family farm with his parents and doting sisters, Barb and Darcy. Life was good for him as he spent his days playing with his cousins, visiting his grandparents who lived next door and exploring the farm. It was on this farm that he learned his strong work ethic, working alongside his Dad. During his school years, he was active in activities such as 4-H and Future Farmers of America. He graduated from the Fergus Falls High School in 1987. He moved to West Fargo in 1995. Craig had several hobbies over the years. He enjoyed Country line dancing at the Eagles Club, played on a Dart League, but most of all, he was a Foodie. Craig loved good food, good restaurants and cooking specialty meals for himself! Having many skills, Craig worked for several manufacturing companies. Most recently, he was employed at Caterpillar, where he worked with rebuilding and re-manufacturing construction and farm equipment. He loved his work and was very knowledgeable in the manufacturing/warehouse industry. He secretly loved to run a forklift! Craig belonged to the Hawley Alliance Church in Hawley, MN, where he professed his faith and was baptized as an adult. He kept very active in his church, attending adult Sunday school, serving coffee and running the audio/visuals for services. He had many special relationships that he treasured. Craig was also involved in Jail Ministry, where he gave his personal testimony and was helping to bring hope to others that were hurting. Most of all, Craig loved his family! He was proceeded in death by his parents; his brothers-in-law, Darwin Forkrud and Craig Godel and his niece, Erin Joy Tabbut. He is survived by his son, Austin Marts, of Moorhead MN, with whom he had rekindled a loving relationship. Austin loved his father deeply and will forever cherish the short time that they were close. He is also survived by his sisters, Barb Godel of Mapleton ND and Darcy Forkrud of Willmar, MN; nieces and nephew, Carly Bosworth, Ashley (Dan) Sawyer, Cody (Jessica) Godel, and Hannah Forkrud; great nieces and nephews, Allison Bosworth, Jaxon and Charlotte Godel, Oliver Forkrud, and Baby Sawyer due in October, whom Craig was so looking forward to meeting; aunts and uncles, Phyllis and Chuck Green, Don and Helen Pederson and godmother, Delores Aune; as well as many cousins and friends. Visitation: 5:00 PM – 7:00 PM Friday, August 30, 2019 at Olson Funeral Home, Fergus Falls, MN Memorial Service: 10:30 a.m., Saturday, August 31, 2019, at Living Faith Church, Fergus Falls, MN Clergy: Reverend John Kilde Arrangements are provided by the Olson Funeral Home in Fergus Falls. Online condolences may be sent to www.OlsonFuneralHome.com

Craig Roger Pederson, 50, a resident of West Fargo ND, died unexpectedly on Tuesday, August 6, 2019 at his home. He was born on January 8,1969, in Fergus Falls, MN to Roger and Bonnie (Martinson) Pederson. Craig was baptized and confirmed... View Obituary & Service Information

The family of Craig Pederson created this Life Tributes page to make it easy to share your memories.