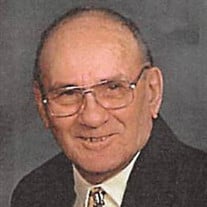 Clinton Emanuel Neu 93, a resident of Fergus Falls, formerly of Dent, went to be with Jesus his Savior, on Saturday, February 24, 2018 at Sanford Health in Fargo. Clinton was born on March 26, 1924, in Rockham, SD. to Andrew and Christina... View Obituary & Service Information

The family of Clinton E Neu created this Life Tributes page to make it easy to share your memories.