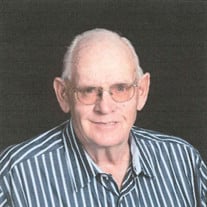 Clifton Orville Wahlgren, 84, of rural Fergus Falls, passed away Wednesday, April 8, 2020, surrounded by his wife and family, and the care of LB Hospice after a courageous battle with a brain tumor. Clifton was born October 17, 1935, the son of Albin and Johanna (Swenson) Wahlgren in Williston, ND. He was baptized at the home of his Aunt Alice Morrill in Fergus Falls on July 21, 1941 and was confirmed at Augustana Lutheran Church of Elizabeth, MN on October 1, 1950. He attended and graduated from elementary school in Grenora, ND. The family moved to the Elizabeth area in 1949. Clifton graduated from the Fergus Falls High School in 1953. He took over the farming when his father passed away in 1953. He later farmed with his brother Donald and then when his brother left the farm, he bought his brother out, to continue farming with his wife and children. He was in the National Guard from 1958-1964 serving active duty at Fort Leonard Wood, Missouri, and then Fort Ord, California for six months. He spent two weeks every summer at Camp Ripley, MN for training as well as two nights a month training and two-day weekends during his time in the guard. He was honorably discharged on June 8, 1964. On October 5, 1963, he married his wife of 56 years, Marlene (Rocholl) Wahlgren at Central Lutheran Church, rural Pelican Rapids. To this union four children were born. He continued to run the farm after his time with the guard and drove milk truck for Fergus Dairy, later known as Mid America Dairy, from 1964-1979. His route consisted mostly of Wishek, ND, as well as working for John and Richard Kvam, on occasion subbing for their milk hauling business. He continued to milk cows and farm as well. He sold the milk cows and got beef cattle, later going back into milking with his wife and children. At the age of 48, he attended North Dakota State School of Science graduating with honors in 1986 from the Diesel Mechanic program. He continued his farming and milking cows as well, this was a big adventure for him with all the work and school, putting in many hours on the farm as well as keeping up his schoolwork. After graduation he sold the cows and went to work for Fergus International, now known as Titan, first as a mechanic, and then later hauling and delivering machinery to six states and Canada from 1986-2002. He then worked for Mark Sand and Gravel the summer of 2002, driving a cement truck. In 2003 he began working for Bradco Restoration, retiring in November of 2017 at the age of 82. He held the positions of President and Vice President of the Augustana Lutheran Church Council of Elizabeth. He was on the Cemetery Board, Property Committee, 125th Anniversary Committee, as well as the Pre-Worship Committee and Altar Guild for several years. Clifton is survived by his wife of 56 years, Marlene; daughter, Cristi (Tim) Field, and sons, Colin (Jean) Wahlgren, Clark (Kathy) Wahlgren, and Carter (Heather) Wahlgren all of rural Fergus Falls; grandchildren, Samantha Wahlgren (Myles Brisben) of Silverdale, WA, Bradie Wahlgren of rural Fergus Falls, Jessica Wahlgren (Steven Marlow) of Duluth, MN, and Allison Wahlgren (Andrew Wendt) of Aberdeen, SD and Millerville, MN, and step-grandson, Ryan (Vanessa) Field and their children, Nolan, Aksel, and Olida Field. He is also survived by a sister, Alice Wahlgren at the Sheridan House in Fergus Falls; brothers, Donald at the Veterans Home in Fergus Falls, Albin (Marilyn) of Pewaukee, WI, and Erwin (Marilyn) of Fargo; his in-laws, Ervin (Camilla) Rocholl of rural Underwood, Darvin (Betty) Rocholl of rural Erhard, Gary (Susan) Rocholl of rural Fergus Falls, and Otto (Kathy) Neuleib of rural Erhard, as well as many nieces, nephews, and a host of other family and friends. He was preceded in death by his parents, Albin and Johanna Wahlgren; parents-in-law, Henry and Irene Rocholl; brother, Morris and his wife, Ellen; sister-in-law, Susan (Rocholl) Neuleib, and nephew, Shane Rocholl. Blessed be the memory of Clifton Wahlgren. In lieu of flowers, memorials may be given to the Augustana Lutheran Church Cemetery Association of Elizabeth, MN or the Cancer Center of Fergus Falls, MN. Graveside Service: 2:00 p.m., Friday, June 26, 2020 at Augustana Lutheran Cemetery, Elizabeth, MN. Please bring a chair to sit on during the service. Also, please respect social distancers during this time. The service will be held rain or shine. Clergy: Reverend Kate Bruns Arrangements are provided by the Olson Funeral Home in Fergus Falls. Online condolences may be sent to www.olsonfuneralhome.com

Clifton Orville Wahlgren, 84, of rural Fergus Falls, passed away Wednesday, April 8, 2020, surrounded by his wife and family, and the care of LB Hospice after a courageous battle with a brain tumor. Clifton was born October 17, 1935, the son... View Obituary & Service Information

The family of Clifton Wahlgren created this Life Tributes page to make it easy to share your memories.