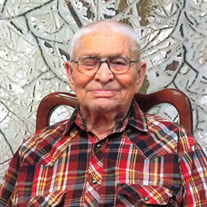 Clifford Ouren, 91, of Fergus Falls, died Monday, January 11, 2021, at the Minnesota Veteran’s Home in Fergus Falls. Clifford was born on December 2, 1929 at the old log house east of Rothsay, to Henry and Selma (Johnson) Ouren and attended country school. He worked on various farms until 1948 and then worked for Flatin Mink and Horse Ranch until July of 1951 when he entered the Army and served in Korea. After his time in the service, he worked for Flatins for a short time and then he worked at Fergus Rendering as a foreman and semi driver at night. In 1957 he went to Seattle and worked construction while there. He moved home in 1966 and worked on a turkey farm for Fergus Mill and Supply, and then in 1975 went to work with his brothers in construction building fertilizer plants. In 1979 he went to Alaska as a carpenter for one summer, then in 1980 took a job as Beach Boss at Wards’ Cove Packing a salmon cannery and also served as their winter watchmen until retirement in 1993. Clifford then worked with his nephews doing carpentry and also doing scroll saw work at home, providing many beautiful pieces of art for others. On August 25, 2016, Clifford moved into the Minnesota Veteran’s Home in Fergus Falls. He loved his home with them and could not have asked for better care. He loved all of the staff but especially loved all of his nursing staff. If there was any way he could show them his appreciation and love for them he would let it be known. They all went out of their way as well to let him know how much he was loved and appreciated by each and every one. On December 30, 1950, he married Evelyn Kowalski, together they had two children, Wayne and Lauri. On October 2, 1964, he married Y. Jean Raffety, she brought three children to their marriage, Robyn, Mark, and Randy. He enjoyed hunting, fishing, and carpentry work. He mostly spent time in the hunting shack at Ackley with grandkids and friends. During the 70’s he served as the Commander of the Underwood American Legion Post 489. Preceding him in death were his parents, Henry and Selma; his wife, Y. Jean; daughter, Robyn Beckman; son, Mark Andrews; a granddaughter, Brenda Beckman; brothers, Harold, Lester, Jimmy, Leroy, and Roy; sisters, Joyce and Sharon, and his missing constant companion, Buddy the dog. Clifford is survived by his children, Wayne (Ann) Ouren of Puyallup, Washington, Lauri (Tim) Nelson of Fergus Falls, Randy (Lyn) Andrews of Henning; son-in-law, Steve Beckman; grandchildren, Kendall Phillips, Sara Stefano, Teresa (Neal) Correy, Stacy (Tim) Hammes, Jason (Melissa) Shearer, Chris (Cindy) Shearer, Carmen (John) Schroeder, T.J. (Destiney) Nelson, Heather (Tyler Young) Nelson, Jacob (Stephanie) Andrews, Kristi (Martin) Steidl, Joshua (Sharon) Andrews, Jeremy (Amber) Andrews; several great-grandchildren; sister, Sylvia (Orin) Koziol; sisters-in-law, Sheila, Pat, and Karen Ouren; brother-in-law, Adrian Westergard; numerous nieces and nephews, and his very dear friend, Lindsey Sagami of Alaska. Walk-Through Visitation: 5:00 p.m. to 7:00 p.m., on Friday, January 22, 2021 at the Olson Funeral Home in Fergus Falls Service: 11:00 a.m., Saturday, January 23, 2021 at Grace Lutheran Church in Erhard, MN Clergy: Reverend Brad Soenksen Interment: Maplewood Lutheran Cemetery, Erhard, Minnesota at a later date Arrangements are provided by the Olson Funeral Home in Fergus Falls. Online condolences may be sent to www.olsonfuneralhome.com

The family of Clifford Ouren created this Life Tributes page to make it easy to share your memories.