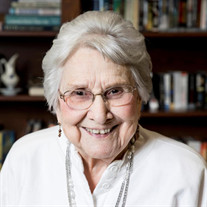 Cleo Jean Langseth, 93, formerly of Fergus Falls, passed away on Tuesday, February 9, 2021, at Serenity Living Center in Dilworth under the care of Hospice of the Red River Valley. Cleo was born March 27, 1927, to George and Anna (Johnson) Curtis in Star Lake Township. She attended country school through 8th grade. Cleo worked as a waitress for a few years before marrying Orris Langseth in 1946 at Maine Presbyterian Church in rural Underwood. Cleo and Orris made their home on a dairy farm in rural Fergus Falls, where they raised their two sons, Daniel and Dale. Cleo was a member of Stavanger Church when they were first married and later joined the Federated Church in Fergus Falls where she was active in the ladies groups. The summer of 1998 Cleo and Orris sold the farm and moved into town. Cleo moved to Serenity Living Center the fall of 2017 so she could be close to her family. The grandkids enjoyed spending time on the farm with the animals and all the hills they had on their property. We found a note in Cleo’s things how she perceived her grandchildren comparing them to three of The Waltons. “Maybe it’s just a grandma’s pride, but as I watch the Waltons, John Boy, reminds me of Timothy caring for others, trying to please, making everyone happy is his goal. Then there is Michael, the Walton boy, who likes airplanes and driving the old truck – enjoys music and dancing? Kimberly, the Walton girl who loves pets, always asking question for mother and grandma Walton to answer.” Cleo claimed her greatest joy was being a mom and grandma. The great-grandkids were a real Joy! Cleo is survived by her son, Dale (Mary Jane) Langseth of Glyndon; three grandchildren, Timothy (Deanna) Langseth of Hawley, Michael (Casinda) Langseth of Fargo, ND and Kimberly Langseth of Moorhead; six great-grandchildren; brother, George (Delores) Curtis of Pennsylvania; brother-in-law, Ervin Langseth of Fergus Falls; and numerous nieces and nephews. She is preceded in death by her husband, Orris; son, Daniel; parents, George and Anna; siblings, Ruby Thom, Eleanor Budke, Marie Ohren, Leone Rau, Shirley Anderson, Margery Bugbee and Keith Curtis. The family would like to give a special thank you to Serenity Living Center and Hospice of the Red River Valley for all their help and care given to Cleo, and to her special friends, Becky Engelson and Melody Gentle. Blessed be the memory of Cleo Langseth. Visitation: 12:00 p.m. to 1:00 p.m., Friday, February 12, 2021, at the Olson Funeral Home in Fergus Falls, MN. Funeral Service: 1:00 p.m., Friday, February 12, 2021, at the Olson Funeral Home Clergy: Reverend David Strom Interment: Knollwood Memorial Gardens, Fergus Falls, MN Arrangements provided by the Olson Funeral Home of Fergus Falls, MN Online condolences may be sent to www.olsonfuneralhome.com

Cleo Jean Langseth, 93, formerly of Fergus Falls, passed away on Tuesday, February 9, 2021, at Serenity Living Center in Dilworth under the care of Hospice of the Red River Valley. Cleo was born March 27, 1927, to George and Anna (Johnson)... View Obituary & Service Information

The family of Cleo Langseth created this Life Tributes page to make it easy to share your memories.