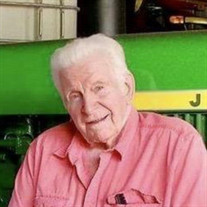 Clement “Clem” G. Klimek, 95, a resident of Cold Spring, MN formerly of Fergus Falls, MN, died Tuesday, November 23, 2021 at Assumption Home in Cold Spring, MN. Clem was born August 24, 1926 in Millerville, MN the eighth child of ten born to John and Anna (Loeffler) Klimek. He grew up in Millerville and attended country school. In 1947, he entered the United States Air Force and served until 1951, when he was honorably discharged. On September 16, 1952 he married Beatrice Koeplin at Our Lady of Victory Catholic Church in Fergus Falls. Farming was Clem’s life passion and he spent many years doing what he loved. He began his farming career in Fergus Falls and in 1957, Clem and Bea bought a farm in Parkers Prairie. They farmed there until 1961, when they returned to Fergus Falls and began farming south of town. Clem built his farm from the ground up, including all the buildings and their home. He retired from farming in 1987. As well as farming, Clem also had a 30-year career at The Montana Flour Mill in Fergus Falls. He was member of Our Lady of Victory Catholic Church in Fergus Falls as well as the Knight of Columbus. He enjoyed fishing, loved to travel, (preferably road trips in the car) and especially loved his time spent on his beloved farm. Preceding him in death were his parents and nine siblings: Mary, George, Alois, Alfred, Carl, Norbert, Cordelia, Urban and Bernadine. Survivors include his wife of 69 years, Beatrice of Cold Spring, MN, formerly of Fergus Falls, MN; son, Wayne (Bonnie) of Saint Augusta, MN; two granddaughters, Jennifer of Sauk Rapids, MN and Julie of Fairbanks, AK; two great-grandsons, Wyatt and Brody as well as numerous nieces, nephews and cousins. Visitation: One hour prior to the service at the church. Mass of Christian Burial: 11 a.m. Wednesday, December 1, 2021 at Our Lady of Victory Catholic Church, Fergus Falls, MN Clergy: Father Patrick Hoeft Military Participation: Fergus Falls V. F. W. Post 612 and American Legion Post 30 Cemetery: St. Otto’s Catholic Cemetery, Fergus Falls, MN Arrangements provided by the Olson Funeral Home in Fergus Falls. Online condolences may be sent to www.olsonfuneralhome.com

The family of Clement Klimek created this Life Tributes page to make it easy to share your memories.