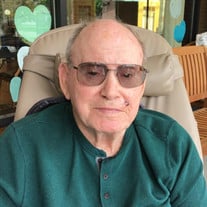 Clarence Hess, 86, of Fergus Falls, died Friday, December 11, 2020, at the MN Veteran’s Home in Fergus Falls. Clarence was born May 2, 1934, to George and Bertha (Goettsch) Hess, in Presho, SD. He attended school in Wheaton, graduating from Wheaton High school in 1953. He served in the U.S. Army with the rank of Sargent, from 1954-1957, during which time he married Beverly Palmquist, on September 23, 1954 at St. John Lutheran Church in Wheaton, MN. She joined him when he was stationed in Virginia close to Washington, D.C. They had the opportunity to visit many places in D.C. and also areas on the east coast. After his discharge from the Army, he attended UND in Grand Forks for three years and received his Bachelor of Science degree later from MSU Moorhead. He taught Business Education in Evansville, Melrose, Wheaton, LeRoy, and Vocational Ed. in Detroit Lakes before coming to Fergus Falls. He then started the Title Atlas Company that created county atlases for counties in North Dakota and Minnesota. He continued doing this until he retired. Following retirement, he drove for Otter Tail County Human Services and was a caretaker at the Iverson Lake rest area, outside of Fergus Falls on Interstate 94. He enjoyed visiting with the people who stopped there. Clarence was a member of the American Legion, Trinity Lutheran Church, Phi Theta Kappa, and the National Education Association. He enjoyed fishing, hunting, and camping. He also enjoyed watching the activities and sports of his children, grandchildren, and great-grandchildren. Preceding him in death were his parents, George and Bertha Hess; siblings, LeRoy, Gilbert, Dale, and Martha; parents-in-law, Fred and Esther Palmquist, and brother-in-law, Frank Beal. Clarence is survived by his wife, Beverly of Fergus Falls; children, Julie (Pat) Millard of Fergus Falls and Jeffrey (Kris) Hess of Glenwood; grandchildren, Sarah (Riston) Norgren of Fergus Falls, Michael (Jordan) Millard of Fergus Falls, Madison Hess of Glenwood, and Morgan Hess of Glenwood; great-grandchildren, Gavin Norgren and Paisley Norgren; sister-in-law, Betty Beal, and numerous nieces and nephews. Service: 1:00 p.m., Saturday, December 26, 2020, at Trinity Lutheran Church in Fergus Falls. The service will be recorded, please refer back to Clarence's Tribute wall for the recording. Clergy: Reverend John Christensen Interment: Trinity-Faith Cemetery, Fergus Falls, MN Military participation by the American Legion Post 30 and V.F.W. Post 612 Arrangements are provided by the Olson Funeral Home in Fergus Falls. Online condolences may be sent to www.olsonfuneralhome.com

The family of Clarence Hess created this Life Tributes page to make it easy to share your memories.