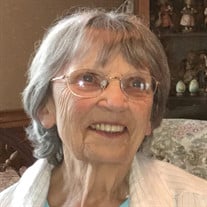 Clara Louise was born February 11, 1923, in Kendallville, Indiana, to Walter Christian and Wilhelmina Louise (nee Misselhorn) Pfaffman. She was baptized on March 18, 1923, and confirmed on May 16, 1937, in Kendallville, by Pastor M.F. Kretzmann, at St. John Lutheran Church. Her confirmation verse was: “Ye are bought with a price. Therefore glorify God in your body and in your spirit, which are God’s.” 1 Corinthians 6:20 She received her elementary education at St. John Lutheran School, Kendallville, and graduated from Kendallville High School in 1941. Following her graduation, she worked several years for Kraft Foods in Kendallville before moving to Indianapolis to continue working for that company. Later she became a church secretary at Trinity Lutheran Church, Indianapolis, where she served with Pastor Walter C. Maas. During those years she enjoyed volunteering for church organizations at local, district, and national levels. While Clara was working at Trinity, servicemen stationed at nearby Fort Benjamin Harrison would attend services and functions at the church. One of those servicemen was Robert M. Boldt, a farmer from Minnesota. He and Clara were married in Indianapolis on June 29, 1952, before moving to the Boldt family farm in Shakopee. Clara transitioned from years as a professional, living in a large city, to being a farm wife. She was anxious to raise a farm family. Robert and Clara were blessed with eight children. Clara learned how to drive a tractor when needed, and spent countless hours gardening, cooking, sewing, and mending to provide for her family. Robert and Clara were faithful supporters of Lutheran education, sending their children to both St. John Lutheran School in Chaska, and Lutheran High School in Mayer. When relocating in 1999, Clara fell in love with the grand Victorian house in Fergus Falls. She and Robert were blessed to make their home there for more than twenty years. Throughout her life, Clara enjoyed the blessings of her Lutheran faith, hymnody, and family heritage. Heirlooms handed down from her parents and grandparents were especially precious. She and Robert, together, enjoyed antique collecting, which led to Clara’s further interest in furniture refinishing. She began learning needlework as a child, and continued enjoying sewing projects all her life. Her family is blessed with a wealth of needlework heirlooms from her hands. Clara passed away peacefully in her home on July 1, 2021, at the age of 98 years, 4 months, and 20 days. The family expresses thanks and gratitude to the staff of LB Hospice for their gentle assistance in helping us care for our mother in her home. Clara was preceded in death by her parents, her sisters, Elizabeth Kretzmann and Margaret Behrmann, and her stillborn son, Jerald Lee. She is survived by Robert, her loving husband of 69 years, and seven children: Janet (Wayne) Kolzow of Sycamore, IL, Judith (Lowell) Schultz of Merrill, WI, John Boldt of Monroe, MI, James Boldt of Minneapolis, MN, Jeffrey (Pamela) Boldt of Shakopee, MN, Jeanne (Jack) Ingalls of Park Rapids, MN, and Jarrod (Darcy) Boldt of Hewitt, MN. Also surviving are many grandchildren and great grandchildren. Memorials are appreciated. St. John Lutheran Church, Chaska, Minnesota Mayer Lutheran High School, Mayer, Minnesota Trinity Lutheran Church, Fergus Falls, Minnesota Concordia Theological Seminary, Fort Wayne, Indiana Services were Tuesday, July 6, 2021, with the funeral at St. John Lutheran Church, Chaska, Minnesota. Committal followed at Valley Cemetery in Shakopee. Pastor John Christensen of Trinity Lutheran Church, Fergus Falls, officiated. Afterward, friends and family gathered at the family farm. A brief prayer service will be held Sunday, July 18, 2021 at 2:00 p.m. at Trinity Lutheran Church 1150 W. Cavour Ave Fergus Falls, MN. A short reception will follow at the church. Arrangements provided by the Olson Funeral Home in Fergus Falls. Online condolences may be sent to www.olsonfuneralhome.com

Clara Louise was born February 11, 1923, in Kendallville, Indiana, to Walter Christian and Wilhelmina Louise (nee Misselhorn) Pfaffman. She was baptized on March 18, 1923, and confirmed on May 16, 1937, in Kendallville, by Pastor M.F. Kretzmann,... View Obituary & Service Information

The family of Clara Louise Boldt created this Life Tributes page to make it easy to share your memories.