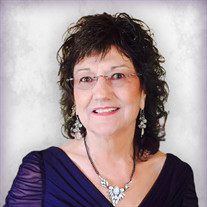 Cinda Tysver, age 76, of Fergus Falls, MN, died peacefully in her home on February 12, 2021, surrounded by the love of her family and friends. Cinda was born on October 2, 1944, in Aberdeen, South Dakota to Herbert Bussian and Agnes (Hainline) Bussian, the youngest of four children. She was baptized and confirmed in Our Saviors Lutheran Church in Aberdeen, SD, and her strong faith and trust in God was apparent in the way she lived her life and how she accepted life’s challenges. Cinda attended school in Aberdeen, and after graduation from high school, she attended Northern State Teacher’s College in Aberdeen, where she met and married her first husband, Kurt Langbehn. Cinda and Kurt were married for 25 years and had three children – Dawn, Kevin and Sharleen. The family lived in Aberdeen, Watertown, and Huron, South Dakota before moving to Fergus Fall, MN in 1979. Kurt and Cinda owned the Goodyear Store, a business that is now owned by their son, Kevin. In 1987, Cinda married Dennis Tysver. Cinda and Dennie were married for 25 years and resided on Jewett Lake. Cinda’s family grew to include Dennie’s children and grandchildren and extended family. Cinda and Dennie enjoyed their life together, living on the lake, going for rides on the pontoon and golf cart, and entertaining family and friends. Cinda was a dedicated wife, mother, and grandmother. She made sure her family was well taken care of especially those who needed extra attention along the way. She loved her children and grandchildren and spending time with them was one of her greatest joys. She always looked forward to visits from her dear sister, Eleanor, who resided in Texas. Cinda was a good friend to many. During her lifetime, Cinda had numerous careers. Her first job was as a telephone operator for Northwestern Bell in Aberdeen, SD. For over 30 years, Cinda worked as a paraprofessional in the school system. She began that career by volunteering in the library in the elementary school her children attended in Huron, SD and eventually became a Title 1 teacher. In Fergus Falls, she worked as a paraprofessional primarily at Adams Elementary School and in the media center at the Fergus Falls Middle School. Cinda loved children and enjoyed all roles she had in the schools. She also assisted Dennie in his role of manager of charitable gambling at the Eagles Club in Fergus Falls and worked part-time selling pull-tabs for over 30 years. Cinda was known for her fun and outgoing personality and her sense of humor. She was a wonderful story-teller and had a gift for making people laugh. Just seeing Cinda enter a room was uplifting as her personality was warm and engaging and there was never a dull moment! Cinda was a fabulous cook and showed her love by feeding others. She enjoyed movies and had quite an extensive movie collection. She loved going out to eat especially at the Viking Café with her grandchildren and never missed an opportunity to go to the casino. Cinda was preceded in death by her husband, Dennis Tysver; her parents, Agnes and Herbert Bussian; her siblings, Audrey Payne and Royce “Ozzie” Bussian, and son-in-law, Terrance “Chip” Saxton. She is survived by her three children, Dawn Saxton, Kevin (Kim) Langbehn, Sharleen (Pat Burns) Langbehn, all of Fergus Falls; step-children Sheri Kenyon and Kim Weise; grandchildren Sean (Deveny) Saxton, Gavin Saxton, Sarah (Chris) Swanson, Seth Langbehn, Sydney Langbehn, Mickael Burns, Michelle Burns, Missy (Jason) Brandner, Daniel (Ali) Kenyon, Erik Kenyon, Joshua Sporre, Nicholas Wiese, Shawna Wiese, Christopher Wiese, and great-grandchildren Ezra Swanson, Ashton, Tayden, and Sullivan Brandner, and sister Eleanor (Jim) Stirling as well as many nieces and nephews. A public walk through visitation will be held from 5 to 7 p.m. Thursday, February 18, 2021 at the Olson Funeral Home. A private family service will be held at a later date. Please refer to her tribute wall for a link to the Live-stream at 11:00 a.m. of Friday, February 19, 2021. Clergy: Reverend Rich Iverson Interment: Knollwood Memorial Gardens, Fergus Falls. Olson Funeral Home in Fergus Falls is in charge of the arrangements. Condolences may be sent online at www.olsonfuneralhome.com

Cinda Tysver, age 76, of Fergus Falls, MN, died peacefully in her home on February 12, 2021, surrounded by the love of her family and friends. Cinda was born on October 2, 1944, in Aberdeen, South Dakota to Herbert Bussian and Agnes (Hainline)... View Obituary & Service Information

The family of Cinda Tysver created this Life Tributes page to make it easy to share your memories.