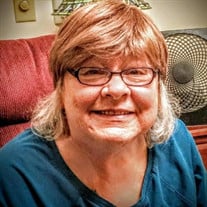 Christine L. (Kallas) Greene, 70, died Friday, November, 27, 2020, at Saint Mary’s Hospital in Rochester, MN of complications from COVID-19. She was born January 25, 1950, to Sam and Carol (Brenna) Kallas in South St. Paul. Her early life was filled with family dinners, picnics, and holidays involving her family, grandmother, aunts, uncles, cousins, and friends. She was a prankster, opinionated, and full of devilish humor. She graduated from South St. Paul High School in 1968 and turned her work-study job as a secretary for a real estate appraiser into a full-time job. In the mid-1990’s, she went to work for the Minneapolis Police Department as a stenographer and the City Attorney’s Office as support staff. She described that job this way: “They go out and arrest someone, and then they handcuff that person to my desk and I type up whatever they have to say.” She took great pride in the fact that she could type as fast as someone could talk – cuss words and all. In 2000, she left the police department and moved to Pelican Rapids – her little slice of heaven – where she could fish on any given day. She worked at her cousin Lee Brenna’s bait shop, trading fish tales with her uncle, friends, neighbors, and strangers. During this time, she met Pelican Rapids native Ron Greene. They were married on April 14, 2001 in Las Vegas. She broadened his horizons with travel and new hobbies; he grounded hers with small-town life. Both Kristy and Ron loved animals and owned Shihtzus, Ouzo and Metaxa, names that were a not Kristy’s Greek Heritage. They successfully bred dogs for several years. Kristy couldn’t stay away from the excitement of law enforcement and went to work for Otter Tail County in September 2001 until November of 2012. First working in the Motor Vehicle Department and then at the Sheriff’s Department, until she retired at age 62 because of her health. Health problems befell both Ron and Kristy. Ron died of cancer in 2013. Kristy became diabetic and suffered serious consequences from it. Chris became very sick and she spent many years doing dialysis three times per week. She desperately needed a kidney transplant which she never received. A couple of things that always made her happy: McDonald’s fries or an order of chicken drummies from Mable’s. With the care of friends, Kay Johnson and Carol Covey, in 2015 she eventually moved to Laurel’s Peak Nursing Home in Mankato, MN, where she made many friends and left a lasting impression. In the end, she died of congestive heart and renal failure, all made worse by COVID-19. She is survived by her siblings, Tony (Cris) Kallas, Randi Kallas, and Shelli (Paul) Beck; five nephews and nieces, Jason (Jen), Jeff, Emily, Alice, and Grace; aunts, Dorothy Brenna and Bernita Kallas; many cousins, including Cindy and Lyle Mack with whom she spent many memorable times, and many friends. She is preceded in death by her husband, Ron; parents, uncles and aunts. Thank you to the dialysis staff in Fergus Falls and Mankato, the Broen Home, PioneerCare, The Golden Manor, and Laurel’s Peak. Words cannot express the thanks for the special care and kindness shown to Chris when she was in hospice care in Rochester. Kristy’s family is extremely grateful for the love and care provided by her friends, Kay Johnson and CJ Covey, the families of Lowell and Loree Brenna, and Lee and Cheryl Brenna. Graveside services will be held at a later date in 2021. Assistance is provided by the Olson Funeral Home in Fergus Falls, MN and Woodland Hills Funeral Home in Mankato, MN. Online condolences may be sent to www.olsonfuneralhome.com

The family of Christine Greene created this Life Tributes page to make it easy to share your memories.