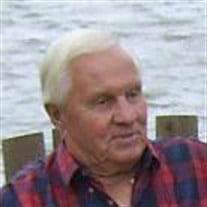 Charles Edward Rovang, 88, of Dalton, died Sunday, November 3, 2019, at his home. Charles was born December 27, 1930, in Fergus Falls to Joseph and Mary (Johnson) Rovang. He grew up in Tumuli Township, he attended school in Dalton and also the Crookston Agricultural School. He was baptized and confirmed at Zion Lutheran Church, in Dalton, where he remained a lifelong member. On January 9, 1954, he married Kathleen Connell at the Zion Lutheran Church in Fergus Falls. Charles served in the US Army and was stationed in Germany. He was discharged in 1956 and then resided in Fergus Falls for a short time. In 1960 they purchased the family farm near Dalton, and have farmed and resided there since. From 1956 to 1976, he also worked as a Psych Tech at the Fergus Falls State Hospital. In addition, he worked at Swedberg and Tysver Nurseries, and Dieseth Specialties. The family loved to camp and to travel, with a trip to Norway being a highlight. Being a farmer, he enjoyed working in the outdoors and on the farm that his great-grandfather homesteaded. Charles read his Bible daily and had a personal relationship with God, and desired to share that with others. He was preceded in death by his parents, Joseph and Mary; a granddaughter, Jennifer Rovang; two infant sisters, and a brother, Allen. Charles is survived by his wife, Kathleen; three sons, Paul (Candy) Rovang of Edinboro, PA, Daniel (Carrie) Rovang of Fergus Falls, and Joel (Tuyet) Rovang of Dalton; two daughters, Diane (Jimmy) Thurman of Minneapolis and Jane (Thomas) Doane of Ham Lake, MN; seven grandchildren, Angelle and Ben, Cara and Justin, Deirdre, Vivian, and Ariel, along with six great-grandchildren. Also surviving are in-laws, Betty Rovang, Stan (Martha) Connell, Gary (Kristin) Connell, and Linda (Gene) Field, along with numerous nieces and nephews. Memorials preferred to Knute-Nelson Hospice. Visitation: Friday, November 8, 2019, from 4:00 to 7:00 p.m. with a prayer service at 6:30 p.m. at the funeral home. Service: Saturday, November 9, 2019, at 1:00 p.m. at Zion-Sarpsborg Lutheran Church in Dalton Clergy: Reverend Mark Johnson and Pastor Dan Hurner Military Participation provided by the Ashby American Legion Post #357 Interment: Sarpsborg Cemetery of Dalton Arrangements are provided by the Olson Funeral Home of Fergus Falls. Online condolences may be sent to www.olsonfuneralhome.com

Charles Edward Rovang, 88, of Dalton, died Sunday, November 3, 2019, at his home. Charles was born December 27, 1930, in Fergus Falls to Joseph and Mary (Johnson) Rovang. He grew up in Tumuli Township, he attended school in Dalton and also... View Obituary & Service Information

The family of Charles Rovang created this Life Tributes page to make it easy to share your memories.