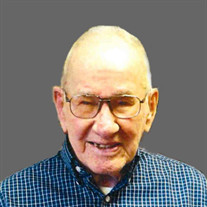 Charles Grabarkewitz, 91, died Saturday, August 10, 2019 at the MN Veterans Home in Fergus Falls. Charles Norman Grabarkewitz was born on December 7, 1927 in Bordulac, ND to Walter and Carol (Hagen) Grabarkewitz. Charles was always a precocious child, often sneaking hidden home canned cherries to the haymow to devour in secret. It was at an early age that he acquired his love of hunting and fishing, which led to a lifelong relationship with the local game wardens. He also taught his daughters to properly cast by stating “It’s a flick of the wrist, not a flick of the arm.” In high school Charles excelled in chemistry and was very knowledgeable in creating chemical compounds. This resulted in the high school being evacuated when he was sent in alone to break down the compound of nitro-glycerin he had created. He also used dynamite to warn his daughter’s dates to treat them with respect as well as blow an occasional stump or window. At the age of seventeen, he was so eager to serve his country, he exaggerated his age and signed up for the ND National Guard. Upon release from the Guard he moved to Minnesota and joined the Army Air Force. He held many ranks, with the one he was most proud of being a Drill Sargent. In 1952, while on leave, he married Marlys Osten of Pelican Rapids. They were married for 61 true marital years. They made their home in Columbus, Ohio where they had two daughters, Cheryl and Carol. After 12 years, they packed up the kids and moved back to relatives in Pelican Rapids where he continued to work as a salesman. In 1986 he helped Marlys fulfill her lifelong dream of owning a Fabric Store/Upholstery Shop. In 2006, they sold the store and ventured into retirement, spending time with family and friends. After the passing of his beloved wife, Charles had a short stay at the Pelican Rapids Valley Nursing Home before being admitted to the MN Veterans Home in Fergus Falls. He was proud to be able to reside in the home that he had a hand in creating. Though he was discharged from the military at an early age Charles was very proud to have served his country, He was an ambitious member of the American Legion serving as Commander, Senior Commander, and Chaplin. He also supported our American veterans every chance he had. He was preceded in death by his beloved wife, Marlys; brother, John Grabarkewitz; sisters-in-law, Alice Grabarkewitz and Rose Sha; brother-in-law, Richard Sha, and his parents, Walter and Carol. He is survived by his daughters, Cheryl (Steve) Rotz and Carol (Jeff) Borremans; five grandchildren, Stephanie (Bernie) Poegel, Jessica Rotz, Andrew (Amber) Borremans, Adam Borremans, and Sarah Borremans; five great-grandchildren, Samuel Rotz, Michael Borremans, and Colby, Ava, and Carter Poegel; brother, Richard (Kay) Grabarkewitz; sister, Karen (Harold) Osten, and numerous nieces and nephews. The family would like to thank the entire staff at The Village at the Fergus Falls Veterans Home. He often expressed his appreciation to all the caregivers with a smile and a Werther’s candy. Many bags of Werther’s candy were emptied in response to the wonderful food and excellent care. Service: Sunday, August 18, 2019 at 2:00 p.m. at the Olson Funeral Home in Fergus Falls. Visitation will be one-hour prior to the service. Clergy: Reverend Brad Soenksen Arrangements are provided by the Olson Funeral Home in Fergus Falls. Online condolences may be sent to www.OlsonFuneralHome.com

The family of Charles Grabarkewitz created this Life Tributes page to make it easy to share your memories.