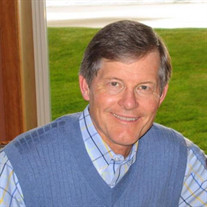 &#8220;Chuck&#8221; left this world quietly, but with the passion for life he had always shown. After gracefully enduring years of progression of MSA, a rare neurological disease, he passed away in his sleep. He did not let the changes his body... View Obituary & Service Information

The family of Charles "Chuck" Lynn Beck created this Life Tributes page to make it easy to share your memories.

“Chuck” left this world quietly, but with the passion for life...